Who are the big winners and losers from Super Tuesday? 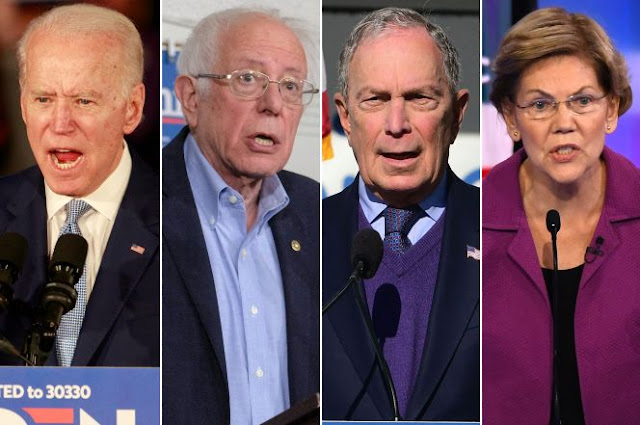 Tuesday was the biggest day of the Democratic primary calendar, with 14 states voting across the nation and a huge number of delegates at stake.

Who emerged as the big winners and losers?

Super Tuesday was a huge night for Biden, restoring him to front-runner status just three weeks after his political obituary had been written following a fifth-place finish in the New Hampshire primary.

Biden rode a wave of momentum into Super Tuesday from his Saturday victory in the South Carolina primary. He won at least nine of the 14 states, and he could add a tenth with Maine, where the result is still in doubt.

Perhaps the biggest surprise was in Texas, where Biden won a victory that neither polls nor pundits had predicted.

Just as importantly, Biden ran up big margins throughout the South. He won Alabama by more than 40 points, Virginia by about 30 points, and Arkansas and North Carolina by roughly 20 points.

Strong support from black voters was the bedrock of his success in the South.

The big margins in turn helped Biden make major strides in the all-important race for delegates.

Final delegates have yet to be allocated — including in the crucial state of California, a Sanders stronghold — but Biden had an overall 351-280 edge in Super Tuesday delegates according to The New York Times’s projections mid-morning Wednesday.

Sanders will at least narrow that gap as California results are factored in. But only a matter of days ago, it was plausible that the left-wing Vermonter would shoot out to a near-impregnable lead on Super Tuesday. Nothing close to that has happened.

Biden is, abruptly, the front-runner once again.

It is one of the most remarkable political turnarounds in years.

The empire struck back.

Sanders’s supporters have argued for some time that he is the kind of disruptor the nation needs. Voters, they insisted, would rally to his outsider appeal, having become disenchanted with the Democratic establishment.

That thesis is in serious doubt. The party establishment proved much more resilient — and disciplined — than many people expected.

Until very recently, it seemed that the pro-establishment, centrist vote was hopelessly splintered while Sanders hoovered up progressive votes and Sen. Elizabeth Warren (D-Mass.) faded.

In fact, the very real prospect of Sanders becoming the nominee galvanized moderates, who fear that he is unelectable against President Trump in November. Once Biden won South Carolina, the centrists swung behind him with startling speed.

But something else was going on as well. Looking at the Super Tuesday results, it appears that Democratic voters are not anywhere near as alienated from their party establishment as Republicans were when they propelled then-candidate Donald Trump to the nomination in 2016.

Biden — a familiar figure for decades, and an incrementalist steeped in the ways of Washington — may simply be acceptable to more Democrats than a firebrand like Sanders.

Biden pulled out all the stops after South Carolina. And he got some crucial help.

Klobuchar’s backing seems, in retrospect, to have been particularly important: Biden won her home state of Minnesota — one of several surprises.

The candidate endorsements, along with those from other party figures, clearly contributed to a sense that Biden had the wind at his back.

The results on Super Tuesday also cast even more of a glow on House Majority Whip James Clyburn’s (D-S.C.) decision to endorse Biden in the run-up to the South Carolina primary.

Clyburn’s endorsement was one of the sparks that ignited Biden’s remarkable comeback.

Sanders’s fervent backers will point to his victory in California as evidence of his appeal and will note that he is competitive in a battle that is now a two-horse race.

Those things are true but they don’t come close to telling the full story — which is that Super Tuesday was super-disappointing for Sanders.

The loss of Texas, where he had campaigned hard and polls predicted victory, was a gut-punch. He lost at least two states, Oklahoma and Minnesota, where he had beaten Hillary Clinton four years ago — and Maine may yet join that list, as Biden is in the lead.

The results also underscored just how many Democrats appear fundamentally uneasy with the idea of Sanders as the nominee.

Biden’s victories across the South sharpen questions about the Vermont senator’s ability to win over black voters — a weakness that doomed him against Clinton in 2016.

Sanders could yet prevail. But Super Tuesday delivered a heavy and unexpected blow.

Bloomberg dropped out of the race on Wednesday morning and endorsed Biden.

There was no other path forward for the former New York City mayor after he spent more than $500 million without making any significant breakthrough.

Bloomberg posted decent numbers in some states but his best placings were in minor contests: He won the only territory for vote, American Samoa, and might claim second place in Utah.

That was nowhere near enough to justify continuing his campaign.

Bloomberg’s campaign was always an uphill climb, given how blatantly he was seeking to buy the nomination.

He took further hits with bad debate performances. The final nail in the political coffin likely came with Biden’s South Carolina win. That made the former vice-president viable again and greatly reduced Bloomberg’s room to run.

It was another depressing night for Warren, who has underperformed expectations every step of the way during the primary process.

Warren trailed in third in her home state of Massachusetts. She didn’t come close anywhere else and was relegated to fourth place, after Biden, Sanders and Bloomberg, in a number of contests.

A Warren campaign aide told The Hill’s Reid Wilson that the Massachusetts senator would be “talking to her team to assess the path forward” on Wednesday. Such phraseology is usually code for an imminent withdrawal.

Sanders backers are also desperate for her to exit the race and give him a chance of consolidating progressive support.

Prior to Super Tuesday, the Warren campaign had been talking up the idea of staying in the campaign all the way to the Democratic National Convention in Milwaukee in July.

Super Tuesday deprived her of any real rationale for doing that. At this point, Warren’s race is run.