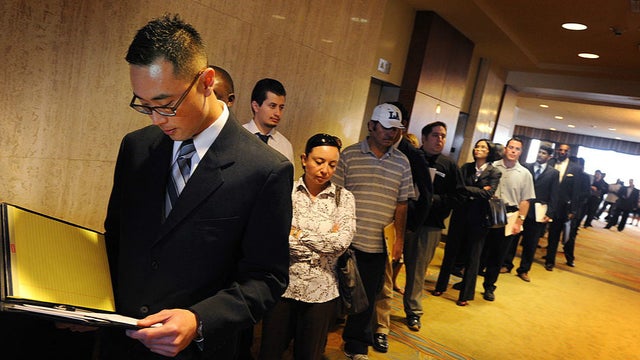 More than 3 million Americans applied for unemployment benefits last week as a devastating wave of layoffs and business closures due to the coronavirus pandemic intensifies, according to data released by the Labor Department on Thursday.

Weekly claims for unemployment insurance rose to 3,283,000 between March 15 and 22, spiking from the 281,000 applications for jobless benefits filed between March 8 and 14.

The staggering rise in jobless claims comes as businesses across the U.S. shutter in a desperate bid to slow the progress of the coronavirus pandemic. Restaurants, bars, retailers, entertainment venues and non-essential businesses across the country have been closed for at least weeks, forcing millions of Americans employed in those industries into joblessness as the coronavirus spreads.

There are more than 69,000 confirmed U.S. cases of COVID-19, the disease caused by the novel coronavirus, resulting in at least 1,000 deaths, according to data compiled by Johns Hopkins University as of Thursday morning.

The pandemic has derailed a U.S. economy that enjoyed 50-year lows in joblessness and record highs in the stock market just eight weeks ago. Economists fear that unemployment could rise toward levels last seen during the Great Depression and warned of a downturn that could far exceed the 2007-08 recession.

The flood of jobless claims has overwhelmed state unemployment application systems across the U.S. and threatened to overwhelm municipal budgets facing stark revenue shortfalls. The one-week rise in jobless claims shattered a record of 695,000 applications set in October 1982, according to Andrew Stettner, senior fellow at The Century Foundation, a left-leaning thinktank.

"This morning’s jobless claims confirm that the United States is in the thralls of a catastrophic unemployment crisis, the likes of which we haven’t seen since the Great Depression," Stettner said in a statement.

President Trump and Congress are hoping to staunch the loss of jobs due to the pandemic with a $2-trillion economic rescue bill passed by the Senate early Thursday morning. The bill includes more than $377 billion in aid to small businesses, including loans that would be forgiven if used to cover payroll and rent during the pandemic. The measure also includes a four-month expansion of unemployment benefits that also covers workers furloughed because of the coronavirus.

The House is expected to pass the measure Friday, though it may takes weeks or even months for the aid to be distributed.

The Federal Reserve is also taking unprecedented steps to keep credit flowing through the economy to households and businesses by extending billions of dollars worth of loans in exchange for Treasury bonds, mortgage-backed securities, corporate and commercial debt as collateral. The Fed is also purchasing more than $700 billion in Treasury notes and mortgage-backed securities to stimulus the economy and pump liquidity into the financial system amid a rush for cash.