Trump: US economy 'may be' sliding into recession 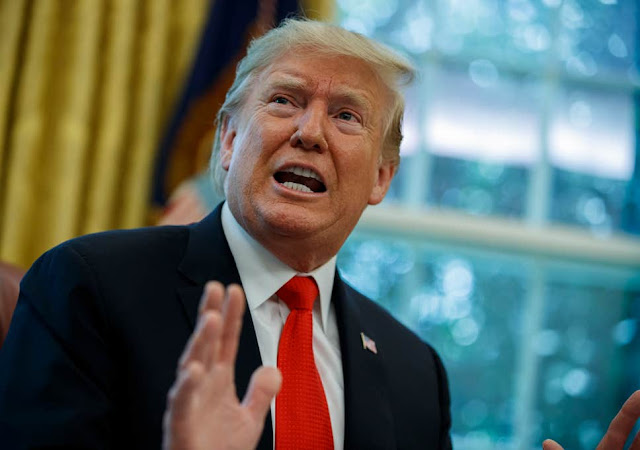 President Trump on Monday said the U.S. economy could be slowing into a recession as businesses across the country shutter to slow the spread of the coronavirus pandemic.

“It may be," Trump said during a Monday press conference, adding he was focused more on the virus than the economy.

Even so, Trump acknowledged that the virus could continue to spread through August and hinder economic activity through the summer.

“I don’t, number one, determine recession,” Trump said. “I just say this: We have an invisible enemy. We have a problem that, a month ago, nobody ever thought about.”

Trump’s comments come as state and local officials close or restrict business at restaurants, bars, and retail stores across the country to help mitigate the toll of the pandemic. The sudden shutdown of much of the consumer economy is likely to cause a surge in unemployment and decline in consumer spending, according to economists, likely causing a recession.

Stocks plummeted even deeper from a Monday morning plunge after Trump's comments, with the Dow Jones Industrial Average closing roughly 3,000 points down, a 12.9 percent drop. The S&P 500 fell 11.9 percent and the Nasdaq composite sunk 12.3 percent.

The steadily rising confirmed cases of COVID-19 in the U.S. and the pandemic's economic impact have crashed U.S. stocks, sent shockwaves through financial markets and raised the risk of recession to a near certainty.

Millions of Americans employed in the dining and hospitality, retail, travel, and entertainment industries are likely to lose their jobs or face severe reductions in hours, economists say, while other workers may be forced to stay at home to care for sick loved ones or children whose schools have closed.

As the economy craters, Trump and lawmakers are under growing pressure to pass a massive economic rescue plan that would support workers and businesses facing financial peril due to the pandemic.

Senate Minority Leader Charles Schumer (D-N.Y.) said Monday he would propose a $750-billion stimulus plan as soon as Tuesday to build off of a House-passed bill facing an uncertain future in the upper chamber.

Sen. Mitt Romney (R-Utah) on Monday backed sending $1,000 to every U.S. adult in a one-time payment akin to checks authorized by Congress during the 2001 and 2008 recessions.