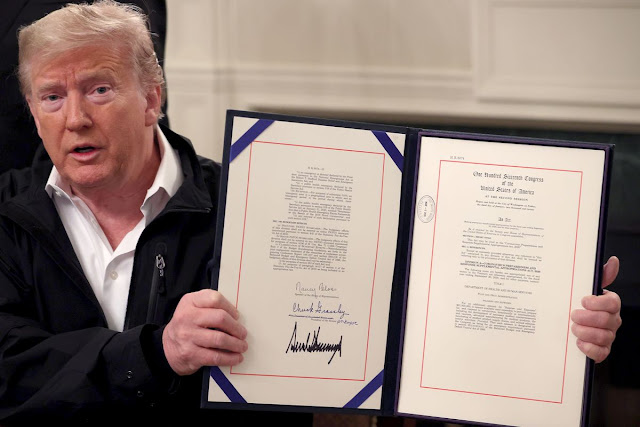 The bill provides $7.76 billion to federal, state and local agencies to combat the coronavirus and authorizes an additional $500 million in waivers for Medicare telehealth restrictions.

Trump was originally expected to sign the bill at Centers for Disease Control and Prevention (CDC) headquarters in Atlanta, Ga., on Friday but abruptly cancelled his trip there. He told reporters Friday morning that the trip was cancelled because of a suspected coronavirus case at the CDC itself but that it turned out to be negative. The White House later put the CDC visit back on Trump's schedule for Friday afternoon.

The president signed the emergency funding bill in the Diplomatic Room of the White House alongside Health and Human Services Secretary Alex Azar Friday morning, shortly before departing for a trip to Tennessee to survey tornado damage there.

The measure includes $2.2 billion for health agencies to prepare for and prevent the spread of the virus in the United States, as well as more than $3 billion for vaccine research. The figure substantially exceeds the $2.5 billion in emergency funding that the White House initially proposed last week.

The House and Senate passed the funding measure in overwhelming bipartisan votes on Wednesday and Thursday, respectively, sending the bill to the president’s desk. Trump’s signing of the bill on Thursday capped a week of aggressive action on Capitol Hill to secure a deal on the funding and pass the legislation in both chambers.

After lawmakers criticized the initial funding proposal from the White House as too low, Trump said he was willing to spend more to combat the virus, and the White House largely left it up to Congress to settle on a dollar amount.

As of Friday, the outbreak had sickened over 200 people in the United States, with reported or confirmed cases in at least 18 states. Public health officials have said they expect more cases within the U.S.