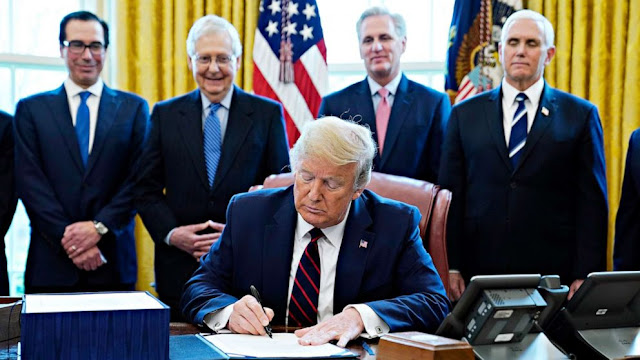 The bill includes $1,200 one-time payments to many Americans; sets up a $500 billion corporate liquidity fund to help struggling industries like airlines; allocated $377 billion for aid to small businesses; and boosts the maximum unemployment benefit by $600 per week for four months, among other provisions.

Trump signed the legislation hours after it passed the House, thanking Republicans and Democrats “for coming together, setting aside their differences and putting America first” with the legislation.

“We got hit by the invisible enemy and we got hit hard,” Trump said during an Oval Office signing ceremony. “I think we are going to have a tremendous rebound.”

The massive bill, dubbed the CARES Act, was the result of days of high-stakes negotiations between the Trump administration and Senate leaders.

The upper chamber passed the legislation in a unanimous 96-0 vote overnight Wednesday, after it hit a last-minute snag when a handful of Republican senators objected to a provision related to unemployment insurance.

The House followed suit, passing the measure in a voice vote Friday. The passage did not come without drama: House lawmakers were forced to scramble back to Washington Friday over concerns a conservative lawmaker objecting to the legislation, Rep. Thomas Massie (R-Ky.), would force a roll call vote.

The president lashed out at Massie in a tweet on Friday morning before the vote, calling him a “third rate grandstander” and accusing him of needlessly delaying its passage.

Trump has urged Congress to pass the legislation quickly as his administration seeks to blunt the economic damage of the coronavirus, which has forced businesses across the country to close and lay off employees.

Treasury Secretary Steven Mnuchin, one of the principal negotiators on the legislation from the administration side, said he expects the government to send the $1,200 payments to Americans who qualify for them within the next three weeks.

The bill marks the third legislative package approved by Congress in order to address the coronavirus, which has sickened over 90,000 Americans and resulted in over 1,000 deaths domestically.

Mnuchin told reporters at a White House press briefing earlier this week that he believed the bill would keep the economy afloat for three months if the coronavirus effects are felt that long.

“Hopefully we won’t need this for three months. Hopefully this will be won quicker, but we expect that this is a significant amount of money, if needed, to cover the economy,” he said Wednesday.

No Democrats were present for the event and Speaker Nancy Pelosi (D-Calif.) was not invited, according to aides.

The bill’s signing comes as the White House debates when to relax social distancing guidelines for parts of the country as Trump seeks to revive the U.S. economy. The administration is nearing the end of a 15-day period during which officials urged Americans across the country to avoid restaurants and bars, cancel non-essential travel plans and limit in-person gatherings to 10 people or fewer.

Trump has said he hopes to have the country “opened up” by Easter, though public health experts have criticized that goal as arbitrary and cautioned against allowing Americans to go back to their normal daily lives too early because of the risk it could aid the virus’s spread.