Trump restricts travel from Europe to fight spread of coronavirus 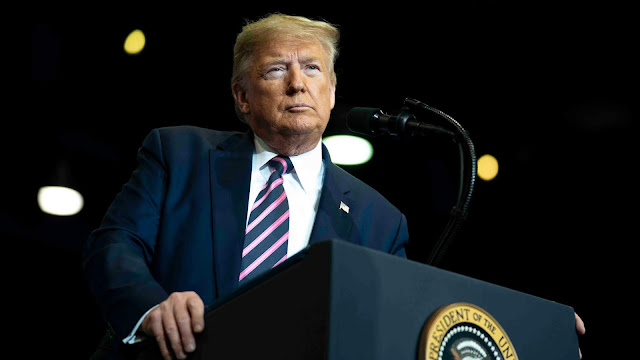 President Trump on Wednesday said the U.S. would restrict all travel from Europe for the next 30 days and use executive orders to offer financial relief to individuals and small businesses in his most extensive steps to date to address the crisis of the coronavirus.

Trump said the extraordinary restrictions would not apply to Great Britain, which formally left the European Union at the end of January.

Trump, in just his second Oval Office address since taking office, sought to assure a worried nation about the spread of the virus, which has infected more than 1,000 Americans and killed more than 30 thus far.

The president used the sober 11 minute address to detail the new travel restrictions and targeted economic relief for small businesses and individuals impacted by the virus, while calling on Congress for further action on payroll tax relief and benefits for hourly workers.
“We are at a critical time in the fight against the virus,” Trump said, reading from prepared remarks.“We made a lifesaving move with early action on China. Now we must take the same action with Europe.”

“I will never hesitate to take any steps to protect the lives, health and safety of the American people. I will always put the wellbeing of America first,” Trump said.

Trump touted his decision last month to curb travel to the United States from China, South Korea and Iran, and he argued Europe increased its own exposure to the virus by failing to do the same.

“The European Union failed to take the same precautions and restrict travel from China and other hot spots,” he said. “As a result, a number of new clusters in the United States were seeded by travel from Europe.”

Trump asserted that the U.S. had seen “dramatically fewer cases” than in Europe as a result of his early actions.

Trump said that the new travel restrictions will be put in place Friday at midnight and that there would be exemptions for Americans who have undergone appropriate screening. The president said that the restrictions would apply to trade and cargo coming from Europe, in addition to people.

Trump has come under criticism for his handling of the coronavirus thus, particularly from Democrats for contradicting top health officials and repeatedly downplaying the severity of the outbreak. He argued as recently as two weeks ago that the number of confirmed cases in the U.S. would soon be “close to zero.”

The World Health Organization (WHO) earlier Wednesday declared the coronavirus a pandemic and the Dow Jones Industrial Average plunged over 1,400 points, closing in a bear market.

The number of American citizens confirmed to have the coronavirus, referred to as COVID-19, topped 1,000 overnight Tuesday, and there have been over 30 deaths in the U.S. as a result of infections of the disease.

Trump on Wednesday maintained that the risk to average Americans remains “very, very low,” even as public health officials have increasingly warned of the spread of the virus and told the public to expect changes in their daily lives.

But he also cast the battle against the virus as being above politics, and said all Americans needed to work on the issue together.

“Each of us has a role to play in defeating this virus,” he said.

He called on the country to “put politics aside” in order to chart a path forward together on the response to the virus.

Doing so may be difficult given the high tensions in Washington.

Trump was impeached by the House in December and his trial concluded in February.

During the coronavirus outbreak, he has at times criticized members of the other party. He described Washington Gov. Jay Inslee as a snake just last week during a trip to the CDC over Inslee's criticism of his administration's response.

Trump in his address avoided alarmist language, telling viewers that the situation did not amount to a “financial crisis.”

“This is just a temporary moment of time that we will overcome together as a nation and as a world,” he said.

Still, the president laid out multiple executive actions aimed at boosting a sagging economy and calm nervous investors. Trump said he would direct the Small Business Administration to provide capital to firms affected by the coronavirus and instruct the Treasury Department to defer tax payments for three months without interest or penalties for specific individuals and businesses adversely impacted by the virus.

Trump called on Congress to pass legislation to extend relief to workers worried about missing a paycheck if they are feeling ill or put into quarantine. The request is likely to be well received among Democrats who have pushed for paid sick leave for hourly workers.

The president also urged Congress to consider a payroll tax cut. Trump on Tuesday pitched Congress on a payroll tax holiday through the end of the year, but the proposal has been received coolly in Capitol Hill.

The Democrat-controlled House is prepared to vote Thursday on its own emergency legislation on Thursday that includes provisions to expand unemployment insurance, extend paid sick leave and make sure children from low-income families don’t miss meals as a result of school closures.

Vice President Mike Pence and Dr. Anthony Fauci, the head of the National Institute of Allergy and Infectious Diseases, called Speaker Nancy Pelosi (D-Calif.) just before 8 p.m. to discuss the House legislation and the president’s planned remarks, according to a spokesman for Pelosi.

Trump was scheduled to fly to Nevada on Thursday to attend a fundraiser and speak at Saturday's Republican Jewish Coalition conference in Las Vegas, but the White House said the trip had been canceled out of an "abundance of caution."