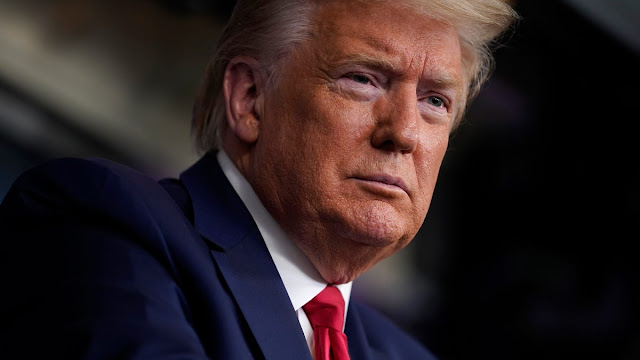 President Trump on Thursday outlined plans for his administration to classify each county across the United States based on its risk for an outbreak of coronavirus and use that information to create targeted guidelines.

In a letter to the nation's governors, Trump spoke optimistically about expanded testing capabilities that would allow officials to identify which areas of the country are grappling with outbreaks and where the virus is spreading.

Based on that surveillance testing data, federal agencies would determine if a specific county is high-risk, medium-risk or low-risk for the virus. The administration is simultaneously working on new guidelines for social distancing that would apply to an area depending on its classification, Trump wrote.

"With each passing day, our increasingly extensive testing capabilities are giving us a better understanding of the virus and its path," Trump wrote. "As testing gives us more information about who has been infected, we are tracking the virus and isolating it to prevent further spread. This new information will drive the next phase in our war against this invisible enemy."

Dr. Deborah Birx, the coordinator of the White House coronavirus response, indicated that the county-by-county classification system would rely heavily on individual responsibility to prevent residents of a high-risk county from traveling to a low-risk county.

"Part of this will be the need to have highly responsible behavior between counties," she said at a briefing Thursday evening. "And I think the American people can understand that, that they will understand where the virus is… and where it isn’t, and make sure that they’re taking appropriate precautions."

It's unclear how quickly the administration expects to be able to roll out the extensive classification system. The federal government's initial response to the virus was hampered by a slow rollout of nationwide testing availability, and many regions are still facing shortages.

As of Thursday afternoon, 432,655 people in the U.S. had been tested for the virus, according to The COVID Tracking Project. The ability to categorize each county would require a dramatic expansion of testing.

Administration officials in recent days have touted a rapid increase in testing and teased a new coronavirus test that would allow Americans to take their own sample at home. But hospital workers and health professionals have warned about a lack of personal protective equipment and reagents necessary to conduct and complete tests.

Even Trump has brushed off the idea of testing the entire country.

"If you take a look at the states — and many states that I'm talking about, they don't have a problem -- we have some big problems, but it's confined to certain areas, high-density areas," Trump told reporters on Wednesday. "So why would we test the entire nation — 350 [million] people?"

But Birx expressed confidence in the ability to compile "granular" data from across the U.S., citing success in doing so in less developed parts of the world in her role combatting HIV/AIDS.

Trump had a call with governors earlier Thursday that was closed to the press. He and Vice President Pence have been in regular contact with state leaders to coordinate the response to the virus, which has infected more than 75,000 Americans and killed more than 1,000 people in the U.S.

In the letter, which was somber and serious in tone, Trump nodded toward his goal of reopening at least parts of the economy by Easter Sunday, which is less than three weeks away.

"There is still a long battle ahead, but our efforts are already paying dividends," he wrote. "As we enhance protections against the virus, Americans across the country are hoping the day will soon arrive when they can resume their normal economic, social and religious lives."

But governors have largely been implementing strict measures in their respective states to try to blunt the spread of the virus. Governors in Idaho, Michigan, California, Illinois, Ohio, New York and other states have issued stay-at-home orders or shuttered nonessential businesses.

State leaders in both parties have dismissed Trump's Easter time frame for easing those restrictions, saying public health will take priority and warning the peak of cases may be occurring around that time.

Even public health experts in Trump's administration have tempered the president's ambitious goal for loosening restrictions. Dr. Anthony Fauci, the director of the National Institute for Allergy and Infectious Diseases, told reporters on Tuesday that officials still needed more data to determine whether areas without current outbreaks might face them soon.

"I think people might get the misinterpretation you're just going to lift everything up and ... that's not going to happen," Fauci said. "It's going to be looking at the data."