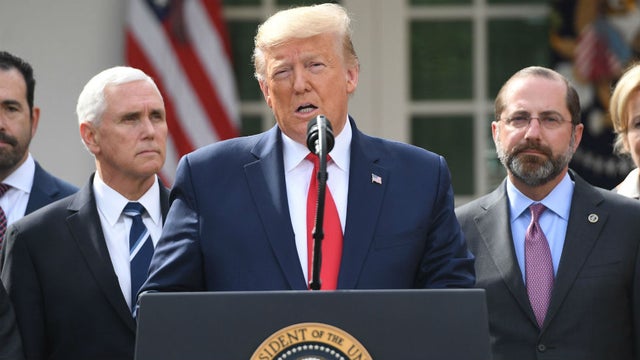 President Trump on Friday declared a national emergency over the coronavirus, freeing up additional resources and funding as federal, state and local governments attempt to combat the rapidly spreading disease.

The move allows the Federal Emergency Management Agency (FEMA) to tap into billions of dollars and mobilize personnel more quickly to help state and local agencies and leaders respond.

Trump had indicated Thursday that he was considering declaring an emergency over the virus as cases quickly mounted in the U.S.

"We have things that I can do. We have very strong emergency powers under the Stafford Act," he said during an Oval Office meeting with the Irish prime minister. "I have it memorized practically as to the powers in that act, and if I need to do something I’ll do it. I have the right to do a lot of things that people don't even know about."

Presidents have typically invoked the Stafford Act to respond to major natural disasters, but former President Clinton used the measure to respond to an outbreak of the West Nile virus in 2000.

By making the emergency declaration, Trump will allow FEMA to tap into more than $40 billion from the Disaster Relief Fund to help states combat the virus, which has sickened well over 1,000 people across the country.

Democrats had urged Trump to declare a national emergency in recent days.

The announcement follows the president’s Wednesday evening Oval Office address, during which he announced a 30-day restriction on travel from most of Europe as well as economic steps to help individuals and businesses impacted financially by the virus’s spread.

But public health experts and Democrats have urged him to do more after he failed to address testing shortages, hospital capacity and other domestic measures that could help stem the spread of the disease.

As Trump spoke, House Democrats were prepared to move forward with a vote on legislation to expand testing and financial assistance to workers and businesses most impacted by the virus. Trump has largely stayed on the sidelines of those negotiations, allowing Treasury Secretary Steven Mnuchin to serve as the White House's point person.

State and local leaders have largely taken measures into their own hands, banning large public gatherings and canceling schools for weeks at a time to try and blunt the spread of the virus. Most major sports leagues have also suspended games indefinitely due to the virus, and movie releases and concert tours are also being pushed back or called off.

Trump's speech also came just before the markets close on Friday. Financial markets have plummeted this week amid uncertainty over the spread of the disease and fears over its impact on global trade. Wall Street on Thursday suffered its worst day since the 1987 stock market crash.

The World Health Organization officially declared the coronavirus a pandemic on Wednesday. More than 135,000 cases have been reported globally, as well as more than 5,000 deaths.