Trump: Coronavirus crisis could go through July or August 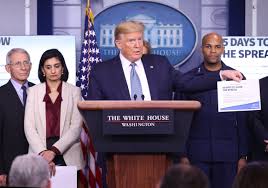 President Trump on Monday urged Americans to avoid traveling and gathering in public spaces in an effort to blunt the spread of the coronavirus, saying the outbreak could last into July or August.

“If everyone makes this change, or these critical changes and sacrifices now, we will rally together as one nation and we will defeat the virus,” Trump said in the White House briefing room. “We’re going to have a big celebration all together.”

“We’d much rather be ahead of the curve than behind it,” Trump said.

The president’s comments on Monday marked his most direct appeal yet for Americans to take the virus seriously and avoid public settings where the coronavirus can be easily spread.

Trump told reporters that the coronavirus could continue to factor into American life into July or August.

“They think August, it could be July, could be longer than that,” Trump said, referring to answers he has gotten when consulting public health officials on the timeline.

Dr. Anthony Fauci, director of the National Institute of Allergy and Infectious Diseases, clarified after Trump’s remarks that the guidelines would not necessarily last until the summer months but rather that timeline was one potential trajectory of the coronavirus outbreak.

“The guidelines are a 15 day trial guideline to be reconsidering,” Fauci said. “It isn’t that these guidelines are going to be in effect until July. What the president was saying is that the trajectory of the outbreak may go until then.”

Trump signaled agreement with him from the podium.

Trump also said he wasn’t considering a nationwide lockdown, but that “certain areas” of the country with large numbers of cases could take such measures.

“At this point, not nationwide,” the president said. “We may look at certain areas, certain hotspots as they call them.”

A number of state and local officials have already ordered closures of restaurants, bars, schools and other public places in order to mitigate the spread of the virus. The Centers for Disease Control and Prevention (CDC) on Sunday evening also recommended that Americans cancel gatherings of 50 or more people for the next eight weeks.

Trump has faced criticism for attempting to downplay the threat of the virus and minimize issues the administration has had rolling out testing. His tone shifted notably on Monday, offering a sober take on the potentially long-lasting effects of the virus.

A day after telling reporters that younger people were not being strongly affected by the virus, he urged young Americans to heed government warnings given they could spread the disease to more vulnerable populations.

Administration officials stood at the podium in front of screens that read “15 Days to Slow the Spread” with advice on best practices to avoid transmitting the virus.

Deborah Birx, a State Department official coordinating the White House response to the virus, put a particular emphasis on millennials following the administration’s guidelines. She highlighted the size of that age group, their tendency to be “out and about” and their proximity to parents and relatives who fall into high risk demographics.

“Millennials can speak to one another about how important it is in this moment to protect all of the people,” she said. “There’s more millennials now than any other cohort, and they can help us at this moment.”

Dr. Anthony Fauci, director of the National Institute of Allergy and Infectious Diseases, urged American citizens to take the new guidelines seriously even if they seemed to go “too far.”

“When you're dealing with an emerging infectious disease outbreak, you are always behind where you think you are if you think that today reflects where you really are,” Fauci said.

“We hope that the people of the United States will take them very seriously because they will fail if people don’t adhere to them,” he said.