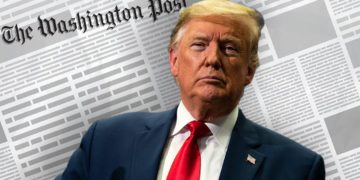 The lawsuit, filed Monday in a Washington, D.C., federal court, comes a week after the Trump campaign filed a similar suit against The New York Times.

The lawsuit cites two Washington Post opinion pieces from June 2019, one which said that then-special counsel Robert Mueller concluded that the Trump campaign “tried to conspire with” a “sweeping and systematic” attack by Russia in the 2016 election.

A second article stated “who knows what sort of aid Russia and North Korea will give to the Trump campaign, now that he has invited them to offer their assistance?”

The lawsuit, which accuses the Post of harboring “extreme bias” against the Trump campaign and Republicans generally, claims the articles will require costly efforts for the campaign to correct the record.

“The defamatory article has forced, and will force the campaign, to expend funds on corrective advertisements and to otherwise publicize the facts that it did not conspire with Russia in 2016 and is not seeking Russia’s or North Korea’s help in the 2020 election,” the lawsuit states. “The campaign was damaged in the millions of dollars, the specific amount to be proven at trial.”

The lawsuit faces long odds in court. To succeed, the campaign will have to carry the heavy burden of proving that the Post’s claims were false statements of fact, and were published with actual malice or reckless disregard for the truth.

Mueller’s nearly two-year investigation found dozens of links between the Trump campaign and the Russian government, but the probe did not establish a criminal conspiracy.

“While the investigation identified numerous links between individuals with ties to the Russian government and individuals associated with the Trump Campaign, the evidence was not sufficient to support criminal charges,” the special counsel report concluded.

“Mueller also concluded that Trump and/or his campaign eagerly encouraged, tried to conspire with, and happily profited off of those efforts. Yet Mueller did not find sufficient evidence of a criminal conspiracy,” wrote Washington Post opinion writer Greg Sargent.

Both of the Washington Post articles referred to a June 13, 2019, ABC News interview in which Trump appeared open to accepting damaging information about his political rivals from foreign countries.

“Your campaign this time around, if foreigners, if Russia, if China, if someone else offers you information on opponents, should they accept it or should they call the FBI?” ABC News's George Stephanopoulos asked Trump in an Oval Office exchange.

“I think maybe you do both. I think you might want to listen, there’s nothing wrong with listening. If somebody called from a country, Norway, ‘we have information on your opponent.’ Oh, I think I’d want to hear it,” Trump replied.