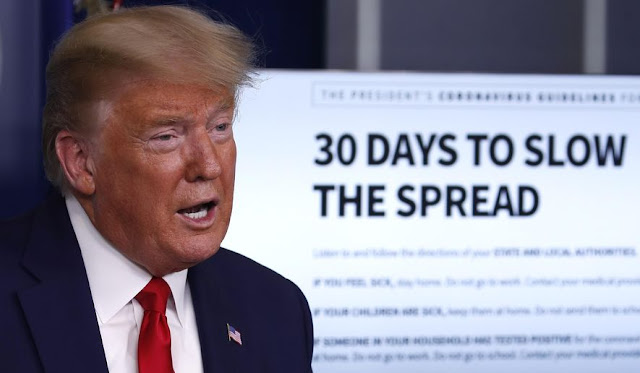 President Trump on Tuesday sought to gird the nation for a grim reality that will set in as the coronavirus pandemic stretches to every corner of the United States.

"I want every American to be prepared for the hard days that lie ahead," Trump said at a White House news briefing. "We're going to go through a very tough two weeks, and then hopefully as the experts are predicting... you're going to start seeing some real light at the end of the tunnel."

Trump and his top health officials laid out data during the briefing that projected up to 240,000 Americans could die from the virus even with thorough mitigation measures in place.

The briefing offered a stark and somber contrast to recent days, where Trump has touted his administration's response and as recently as last week was expressing optimism that the country could be reopened by Easter.

Instead, the officials cited the data to extend federal social distancing guidelines through the end of April, urging Americans to stay at home whenever possible and avoid gatherings of more than 10 people.

Trump spent much of January and February downplaying the threat of the virus. He said at various times it was "under control," suggested it would dissipate with warmer weather and mused it would disappear "like a miracle."

But the president in recent days appears to have grasped the severity of the situation as the number of cases skyrocket. There are more than 183,000 confirmed cases in the U.S., significantly more than the official tally in any other country. More than 3,700 Americans have died from the virus.

Trump has appeared particularly shaken by the virus ravaging his home state of New York and neighboring New Jersey more than the other 48 states.

The president has repeatedly referenced images of bodies being taken away from Elmhurst Hospital in his native Queens. On Tuesday, he described watching the governor of New Jersey discuss the state's death toll.

"I know New Jersey so well," Trump said of the state where he previously owned casinos and frequently spends weekends during the summer.

Trump's last several press briefings have been marked by sparring with reporters, boasting about ratings for his primetime remarks and insisting the federal response had been "fantastic."

Tuesday's appearance contained its share of Trumpian moments, such as when he scoffed at reports that his administration was considering deferring tariffs because he had not signed off on it. He also repeated his claim that the U.S. had tested more people than any other country even as it lags behind other nations on a per capita basis and governors nationwide warn of shortages in materials.

The two health professionals presented Trump with data over the weekend that showed an estimated 2.2 million Americans could die of the virus without any mitigation measures. The figure swayed Trump, who on Sunday backed off his desire to reopen the economy sooner than later and said the country would continue to hunker down through the end of April.

Fauci and Birx on Tuesday presented the same data that led to Trump's decision, which suggested between 100,000 and 240,000 Americans could die with successful mitigation measures.

The two were blunt in discussing the realities that scores of Americans would die from the virus, but expressed hope that continuing with stringent social distancing could help keep the death toll on the lower end of projections.

"Now is the time whenever you’re having an effect not to take our foot off the accelerator and on the brake, but just to press it down on the accelerator," Fauci said.