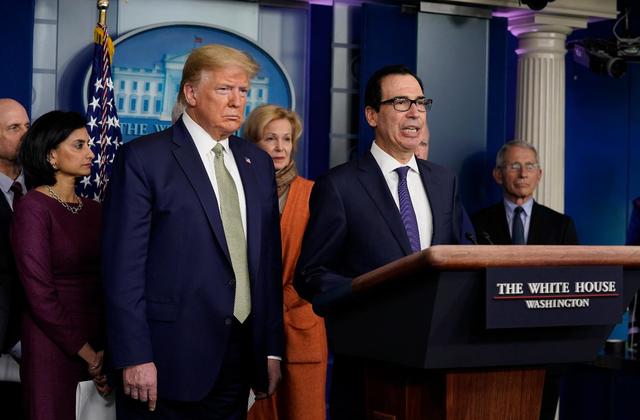 Treasury Secretary Steven Mnuchin said Tuesday that the Trump administration wants to send checks to Americans in the next two weeks in order to address the economic impact of the coronavirus outbreak.

“You can think of this like business interruption payments to the American worker,” Mnuchin told reporters at the White House on Tuesday. “Although the president likes the idea of a payroll tax holiday … we’re looking at sending checks to Americans immediately.”

Mnuchin is expected to brief Senate Republicans on the proposal later Tuesday. President Trump, who also appeared at the press briefing, said the administration could make such payments in “four or five” ways. He said a payroll tax cut was one way of getting money to Americans but said the administration was leaning toward other methods in order to do so more quickly.

“There are some very good ways of getting the money out and getting it out quickly,” Trump said, adding that officials would have “a pretty good idea” of how they would accomplish it by the end of the day.

Mnuchin said the administration was considering putting a cap on who would receive the one-time payments depending on income.

“I think it’s clear we don’t need to send people who make a million dollars a year checks, but that’s one of the ideas we like,” the Treasury secretary said. “We’re going to preview that today and we’ll be talking about details afterwards.”

Sen. Mitt Romney (R-Utah) on Monday floated the idea of sending $1,000 checks to Americans to try and bolster the economy and provide support for those who have lost their jobs or are facing uncertainty amid the outbreak.

The president earlier this month made a strong push for a payroll tax cut as his preferred means of economic stimulus. But the idea fell flat with lawmakers in both parties who reasoned it would not benefit those most affected by the coronavirus.

Later, Trump said he wasn’t shifting away from considering a payroll tax cut, arguing that it was still possible the administration would do a percentage of payroll tax cut paired with other measures.

“We’re looking at payroll tax and we’re looking at other various forms of getting money to people,” Trump said, noting that a payroll tax cut could take months to put more money in the pockets of Americans. "We don’t really have months."

The Trump administration is seeking a roughly $850 billion economic stimulus package from Congress in order to address the economic impact of the coronavirus. The proposal includes payments to small business and loan guarantees to critical industries such as airlines and hotels, Mnuchin told reporters Tuesday. The airline industry on Monday requested $50 billion in federal help.

“We look forward to having bipartisan support … to pass this legislation very quickly,” Mnuchin said.

The stock market has plunged in recent days, wiping out most of the gains during Trump's presidency amid uncertainty about the impacts of the virus. Airlines have cut back on their flights significantly and restaurants and hotels have furloughed or laid off workers in the face of a sharp decline in demand.

Trump on Monday recommended that Americans avoid public places such as restaurants and bars, limit their travel and avoid gatherings of more than 10 people for the next 15 days as the federal government seeks to blunt the spread of the virus. A number of restaurants and bars have reduced their operations or closed entirely amid the outbreak.