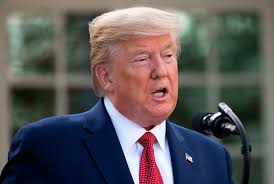 President Trump on Sunday announced that the White House will keep its guidelines for social distancing in place through the end of April to try to blunt the spread of the coronavirus, a significant shift from less than a week ago, when he said he hoped the country could be “opened up” by Easter Sunday, April 12.

“Nothing would be worse than declaring victory before the victory is won,” Trump said in his remarks on Sunday. “That would be the greatest loss of all.”

Trump encouraged Americans to follow the guidelines issued by his administration roughly two weeks ago urging them to avoid restaurants and bars, cancel nonessential travel, and limit in-person gatherings to 10 people or fewer. But with those guidelines set to expire on Tuesday, Trump faced pressure from health experts to extend them or risk seeing a heightened death toll.

The president predicted that the U.S. would likely hit its peak death rate from the virus in two weeks — around when he had once hoped to begin reopening the country. He went on to suggest the country would be “well on our way to recovery” by June 1.

Dr. Anthony Fauci, director of the National Institute of Allergy and Infectious Diseases, called the decision a “wide and prudent” one. Fauci earlier Sunday had said the United States could see 1 million cases of COVID-19, the disease caused by the coronavirus, and 100,000 to 200,000 deaths.

Fauci during the Sunday evening news conference stood by those figures but also said that the extension of social distancing policies could curb such an outlook.

Trump said Sunday that the White House would be finalizing its plans for social distancing over the next few days and lay out the strategy and supporting data sometime Tuesday.

Trump’s abrupt shift comes as confirmed cases and deaths from the virus have been climbing rapidly in recent days. The U.S. has far surpassed Italy and China to record the highest number of cases of any country in the world, with more than 137,000 confirmed infections as of Sunday evening. More than 2,400 Americans have died from the virus.

The president has seen the economy crater as a result of the coronavirus shutdown, and members of his team have been eager to reopen parts of the country.

Trump rejected on Sunday that publicly setting the Easter timeline was a mistake, calling it “aspirational.”

Trump later expressed grievances about the adverse impact on the economy but asserted that a total of 2.2 million people would have died in the United States if his administration hadn't taken the action that it had.

"We had the greatest economy in the history of the world, and now we've said, 'Please dont work anymore,'" Trump said. "People want to work."

The announcement came two days after Trump signed a $2 trillion economic relief package aimed at helping American workers and companies adversely affected by the coronavirus, which has forced business closures and massive layoffs across the country. More than 3 million people filed for unemployment benefits earlier this month, according to data released last week.

Trump also said Sunday that he would call on Congress to come back to session if states did not quickly supply workers who lost their jobs with unemployment checks so they can resolve the issue. He raised concerns that state unemployment offices might not be able to quickly process claims jacked up by the stimulus measure.

Trump's Easter Sunday goal, which he mentioned during a Fox News town hall on March 24, appeared increasingly unrealistic over the past several days as the number of U.S. cases escalated. The White House appeared to be laying the groundwork for pushing back the timeline last week as officials described it as “aspirational” and Trump indicated it was not a hard-and-fast goal.

“We want to see that curve start heading down in the other direction, at a minimum. And we really have to talk about areas of the country that have not been affected or certainly have had a very small effect,” Trump told reporters Friday at a White House briefing.

"I certainly want to get it open as soon as possible," he said. "I don't want it to be long, but we also want it to open safe. Otherwise, what did we do?"

The administration is working to ramp up testing in an effort to potentially ease restrictions on certain parts of the country sooner than others.

Trump said in a letter to governors last week that his administration was collecting data to classify certain counties as low risk, medium risk or high risk for the coronavirus, which would allow the federal government to issue tailored guidelines on what kinds of social distancing measures are needed.

Vice President Pence wrote to hospital administrators on Sunday asking them to begin reporting how many tests they conduct each day to try to gather more data for the project.

But Sunday’s announcement makes clear that even with advances in testing and contact tracing, the administration will not begin to relax the guidelines for at least another month. Trump said he considered leaving the door open to loosening restrictions in certain areas but that his own health officials indicated it was not practical.

"They said, 'We don’t like that idea,'" Trump said of Fauci and Dr. Deborah Birx, the two most prominent health experts on the coronavirus task force. "And we could do it, but I don’t think it would be good."

Trump has previously identified the farm belt — Iowa, Nebraska and Idaho, in particular — as states with relatively low numbers of infections that he believes could go back to work relatively soon.

Governors across the country have imposed strict measures intended to slow the spread of the virus that supersede the federal guidelines. California, New York, Illinois, Michigan, Idaho, Oregon, Ohio and Louisiana are among the states that have issued stay at home orders and closed businesses deemed non-essential.