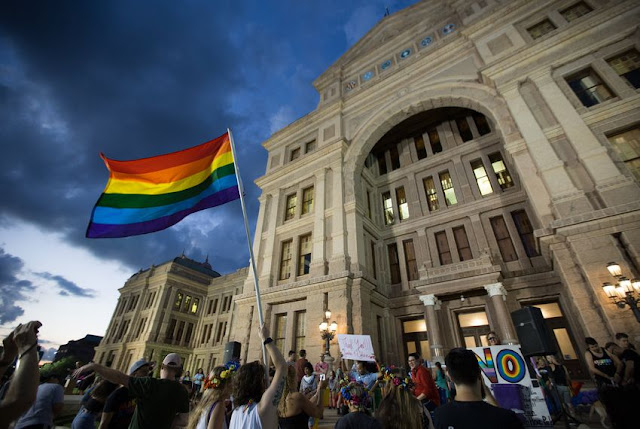 For more than two decades, Texas’ GOP leadership has snubbed LGBT Republicans asking to participate in the annual state convention — a move that has some conservatives calling on the party to reconsider its exclusionary policies.

The rejection of LGBT conservatives, or Log Cabin Republicans, came again in February — with an added insult from a state GOP official who compared LGBT people to criminals in a social media post. Now Texas Democrats say they are reaching out to disillusioned Republicans who are turned off by the party's stance on LGBT rights.

Texas Democrats are positioning themselves as an “inclusive” political alternative, and the party is hiring its first-ever LGBTQ+ constituency organizer, said spokesman Abhi Rahman, who added that several former Republicans have contacted the party as a result of its outreach.

“The Texas Democratic Party is open and inclusive, and we welcome anyone who wants to fight for issues that matter to all of us … regardless of what divides us,” Rahman said. “We are creating a movement that's diverse and inclusive that defeats Republicans up and down the ballot in 2020.”

But other Republicans and political watchers said they aren’t projecting mass defections over the issue.

Jason Vaughn, a conservative in Houston who is gay, said he doubts any Republicans will jump ship to the Democrats as a result.

“Just because you disagree with 5% of the Republican platform doesn’t mean we’re going to vote with someone we disagree with 95%,” Vaughn said.

The concerns about LGBT membership bubbled up in February when state GOP leaders again decided not to allow the Log Cabin Republicans to operate a booth at the state convention and a member of the State Republican Executive Committee compared LGBT Republicans to criminals.

“LCR’s unique identity is homosexuality which is in conflict with the principles & platform of the Republican Party,” Sue Evenwel wrote in a since-deleted Facebook comment. “The party would also not allow express advocacy groups for murders, burglars, adulterers or fornicators, yet there may be some among us dealing with those issues who are also Republicans working and voting for our candidates.”

Evenwel did not respond to a request for comment. Asked about the party leadership's rejection, Michael Baker, current president of Log Cabin Republicans in Texas, said he'd rather focus on working alongside other Texas Republicans to ensure the reelections of President Donald Trump and U.S. Sen. John Cornyn.

The Texas Democratic Party was quick to frame Evenwel's post as another example of “hate and extremism within the Texas Republican Party.”

Vaughn said it's frustrating to see state GOP leadership disparage LGBT people, but he thinks the party is ultimately moving in a more inclusionary direction — however slowly that might be. In the meantime, he said he’s afraid the party will have a harder time recruiting new members.

“[Republicans] are not going anywhere, but it does make it harder to reach out to other people who lean right and hold conservative values, but they don’t see a place for themselves in the party yet,” said Vaughn, who is also policy director at Texas Young Republicans, which has backed the Log Cabin Republicans.

The Texas LGBT conservative group has the backing of some high-profile Republicans like U.S. Rep. Dan Crenshaw, R-Houston, and other younger Republicans.

“The Log Cabin Republicans have worked tirelessly for conservative causes and candidates,” Crenshaw said in a February statement. “They were there for me in 2018 when I ran for office, working hard and playing a significant role in our grassroots campaign.”

“Crossover voting … is entirely possible,” Haider-Markel said. “But could [Democrats] actually get them to convert their party allegiance? That's a steeper hill to climb.”

With the state convention just a few months away – in a year when Republicans are fighting to hold on to their majority in the state House — this intraparty division is “horrible timing,” Haider-Markel said.

“If I was a Republican in Texas, my concern would not be, are LGBTQ folks going to switch parties — but are they going to turn out and vote on Election Day?” Haider-Markel said. “And if [Republicans] demobilize elements of their constituency by alienating them, even though that's going to be a small percentage of their overall vote, 1 or 2 percentage points is going to make the difference in a lot of elections in 2020.”

The state Republican Party did not respond to requests for comment.

While the state Republican Party grapples with its relationship with LGBT members, the issue is all but guaranteed to be a flashpoint at the May GOP convention — which is supposed to be a time of unity before November’s battle to maintain control of the Texas House.

There, Republican delegates will elect their next state party chair, and support for the Log Cabin Republicans is already emerging as a sticking point.

Allen West, who is challenging Texas GOP Chairman James Dickey for the position, recently said of the group, “You can make the tent bigger, but at some point the stakes will get pulled out of the ground and the tent will blow away,” reported Quorum Report editor Scott Braddock.

Neither West nor Dickey respond to requests for comment.

Marco Roberts, secretary of Log Cabin Republicans in Texas, said he expects the issue will crop up at the convention in the form of debates over the Texas GOP’s platform. The state party opposes "any criminal or civil penalties against those who oppose homosexuality out of faith, conviction, or belief in traditional values." But Roberts scoffed at the notion that Log Cabin Republicans would find a more tolerant home in the Democratic Party.

Despite a few individuals’ ugly remarks, Roberts said it is “a lot easier” being gay in the Republican Party than it is being a Republican in the LGBT community, which trends Democratic.

“The pressure from our own [LGBT] community is a lot worse,” Roberts said. “It’s challenging, but not nearly as bad as it is being a Republican in our community.”