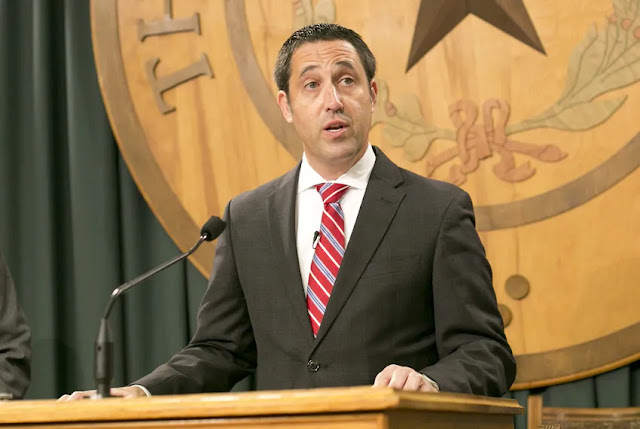 Comptroller Glenn Hegar briefed Texas House members on the state's economy and budget Sunday night, saying that while it was too soon for specific forecasts, both are expected to take potentially massive hits in the wake of the new coronavirus pandemic, according to multiple people who were on the conference call.

The members-only call, led by House Speaker Dennis Bonnen, R-Angleton, was one of state lawmakers' first glimpses of the impact the virus is expected to have on multiple industries, state finances and Texas' largely oil-fed savings account, known as the Economic Stabilization Fund or the rainy day fund.

Hegar, who referred to the state of the economy as "the current recession," according to multiple people on the roughly hourlong call, predicted both the general revenue for the state budget and the savings account balance will be drastically lower — possibly by billions of dollars — when he makes a revised fiscal forecast. He said that update could happen in July.

Later Sunday, the comptroller's office said that unless the Legislature spent money out of the savings account before July, the balance for the fund would be revised down, but not by more than $1 billion.

In October 2019, Hegar estimated that the state budget would have a nearly $3 billion balance for the fiscal 2020-21 biennium. The balance of the Economic Stabilization Fund, Hegar announced at the time, would be around $9.3 billion by the end of the 2021 fiscal year in August of that year.

The virus has already shocked economies around the country, though it's unclear how extensive the economic downturn will be. As the new coronavirus grew into a pandemic earlier this month and Saudi Arabia declared a price war on Russia, oil prices plummeted to their lowest points in decades. Since Texas is the nation’s top oil-producing state, its economy and budget are particularly sensitive to oil prices.

Then, as the virus started spreading within the state’s borders, officials shuttered or limited several industries’ operations to limit public interactions and stem the growth of new infections. Those two situations created a double whammy by slowing two key revenues that fuel the state’s budget and economy: sales taxes and oil and gas production. Experts have said the economic damage will largely depends on how long the public health crisis lasts.

Last week, Gov. Greg Abbott issued an executive order directing bars, dine-in restaurants and schools to close as he estimated that tens of thousands of Texans could test positive for the virus in coming weeks.

On Sunday, Hegar told lawmakers he plans to keep all parties updated as the picture for the next several months continues to crystallize. He also pointed to the post-9/11 economy as good perspective for what the near future could look like, and mentioned multiple times that the amount of federal funding that Texas receives could also have a major impact.

According to members on the call, Hegar fielded a number of questions, ranging from whether the governor has the jurisdiction to push back sales tax collections for specific industries — no, the comptroller said — to whether state dollars can be shifted around within the state budget during such a crisis.

Abbott, for his part, noted last week that he and the Legislature can tap into the state's disaster relief fund immediately to help respond to the virus. He also said that the Economic Stabilization Fund could be used "at the appropriate time," which he said would happen when state leaders "know the full extent of the challenge we're dealing with."

Before the stabilization fund could be used, Abbott would need to summon state lawmakers back to Austin for a special session before the Legislature reconvenes in January 2021. When asked at a town hall about the possibility for calling such a session, Abbott said "every option remains on the table," while noting that there would not be any need for such an action if every Texan followed guidance to help curb the virus.

On Sunday night's call, after a member mentioned a special session, Bonnen said Abbott had not yet said there was a need for one — though, the speaker added, that could of course change in the future.