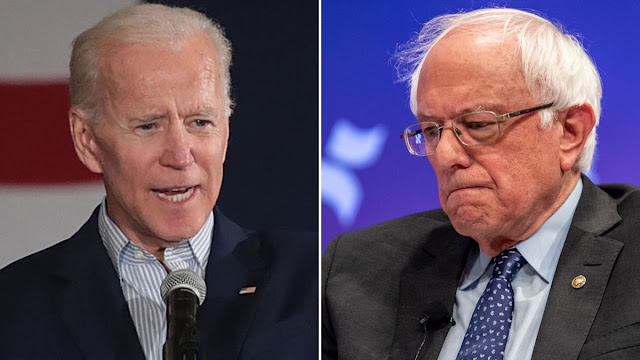 Here are five takeaways from the Tuesday elections:

Biden moves closer to the nomination

Biden will have a significant lead in delegates over Sanders when all of the votes are counted.

Given the party’s proportional allocation of delegates, it is extremely difficult for any candidate to make up a lot of ground. The map grows even more favorable for Biden in the weeks ahead, and polls indicate Sanders is facing huge losses in coming contests in Florida, Arizona and Georgia.

In the minds of many Democratic lawmakers and operatives, the race is over and Biden has won. Cable news pundits and analysts have shifted from talking about Biden versus Sanders to speculation about the likely general election matchup between Biden and President Trump.

Biden is still less than halfway to the 1,991 delegates needed to win the nomination outright.

But party leaders have rallied behind his campaign in rapid fashion over the past 10 days and voters have followed suit, leading to one of the most sudden and dramatic shifts in primary polling that analysts have ever seen.

Given the size of Biden’s victories, the regional sweeps and the diverse coalition of voters who are turning out for him, his nomination is beginning to take on an air of inevitability.

Sanders faces steep uphill climb to get back into the race

Sanders has not been eliminated but the outlook for him is grim.

Sanders flew home to Vermont and did not give a public speech on Tuesday night, a rarity for him on a primary election day.

In states such as Michigan and Missouri, Sanders underperformed his 2016 showing, as Biden cut into his base of support among rural voters and working class whites.

The final tallies are not in yet for Washington and North Dakota, where Sanders scored big victories in 2016. But polls showed a tight race heading into Tuesday night, and Sanders is unlikely to make up much ground in those states even if he’s able to pull out wins.

Biden and Sanders are scheduled to square off in a one-on-one debate for the first time on Sunday ahead of next Tuesday’s elections in Arizona, Florida, Illinois and Ohio.

Progressives want to see Sanders get a shot at Biden with no one else on stage.

But there will be enormous pressure on Sanders not to harm the candidate that most Democrats view as their likely nominee.

The South Carolina primary in late February increasingly looks like the defining moment of the 2020 primary race.

Biden won the Palmetto State in a rout, as the black voters who make up a majority of the Democratic electorate in the state propelled him to a 24-point victory over Sanders.

That turned out to be a harbinger of things to come in last week’s Super Tuesday contests. Biden romped across the south, with big victories in Alabama, North Carolina, and Virginia, in large part due to black turnout.

On Tuesday night, Biden won Mississippi in a blowout, with exit polls suggesting that Biden won about 75 percent support among African Americans. That’s huge in a state where the Democratic electorate is about two-thirds black.

Among black voters aged 60 and older, Biden won an astonishing 96 percent support Mississippi, according to one exit poll.

Biden’s string of victories came after he struggled mightily in Iowa and New Hampshire, the first two states to vote that also happen to be predominantly white.

It’s a stark reminder that a candidate can’t win the Democratic nomination without support from black voters.

Sanders’s lack support among African Americans doomed his 2016 primary campaign against Hillary Clinton and may cost him once again in 2020.

Sanders has not been able to grow his base of support

There are some bright spots for Sanders in 2020. His outreach to Latino voters paid off for him with a big victory in the Nevada caucuses in February.

But Sanders has not been competitive with Biden among black voters or suburban women. The young voters who have turned out by the thousands to go to Sanders’s rallies have not turned out in the same numbers for Sanders at the ballot box.

And the former vice president has eaten into Sanders’s support among rural voters and white people who do not have a college education.

Exit polls of Michigan found Biden winning whites with no college degree by 6 points, whereas Sanders won this group by 14 points over Clinton in 2016.

Those rural and working class voters fueled Sander’s 2016 run, but appear to have found a new home in Biden in 2020.

That may have cost Sanders in Michigan and Missouri on Tuesday night, just as it hurt him in Minnesota on Super Tuesday last week.

Both Biden and Sanders cancelled planned rallies in Cleveland on Tuesday night over fears that bringing together a large group of people would put rally-goers at risk of spreading or contracting the coronavirus.

The Democratic National Committee has said that it will not host a live audience at Sunday’s debate over the same fears.

The campaign trail might start to look as empty as people stay home and avoid contact with one another.

Those developments hurt Sanders’s campaign the most, as he relies on drawing tens of thousands to his raucous rallies.

Fears over the coronavirus also may have accelerated the move behind Biden on Tuesday night, as a strong majority of voters told exit pollsters that they trust the former vice president the most in a time of crisis.