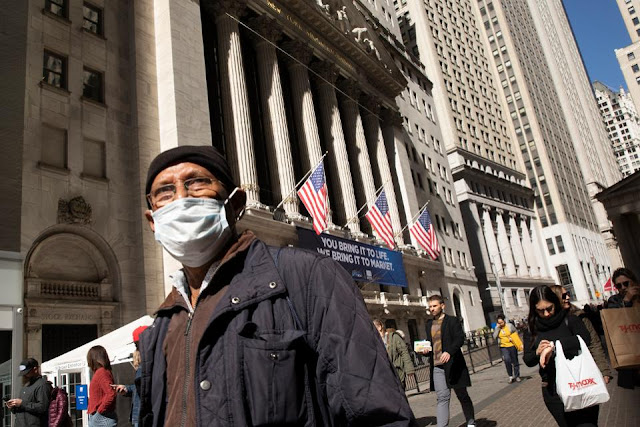 Stocks cratered Thursday as the escalating coronavirus pandemic and lingering questions about President Trump’s response drove the worst day of losses for Wall Street since the 1987 crash.

The Dow Jones Industrial Average closed with a loss of 2,352 points, dropping 10 percent for its steepest loss by percentage since falling 22.6 percent on Oct. 19, 1987.

The Dow’s Thursday losses also exceeded its 7.87-percent plunge on Oct. 15, 2008, which was the index’s most recent record for the steepest single-day drop by percentage.

Thursday’s record-breaking losses come amid increasing panic over the humanitarian and economic toll of the COVID-19 coronavirus outbreak. Public health and government officials are urging Americans to adopt social distancing practices to avoid a sharp increase in confirmed U.S. coronavirus cases, which exceeded 1,000 on Wednesday and has claimed more than 30 lives in the U.S.

President Trump and lawmakers are facing growing pressure and a narrowing window to bolster the federal government's fight to mitigate the spread of the virus and limit the deep economic damage it is likely to cause. Economists warn that without robust and rapid action to improve the country's medical response and protect the economy, the U.S. will likely slip into a recession.

Trump said during an address from the Oval Office on Wednesday that he plans to take "targeted" action to help Americans who will miss work or lose their jobs due to the coronavirus and businesses likely most vulnerable to steep declines in consumer spending.

The president said Wednesday night he would instruct the Small Business Administration (SBA) to increase loans to help businesses overcome the slowdown, take unspecified executive actions to protect workers and seek Congressional approval of a payroll tax cut that has fallen flat among lawmakers.

Stocks futures plummeted after Trump's remarks, in which he also announced travel restrictions on European travel to the U.S., and projected a steep loss heading into Thursday trading.

"Nothing happened overnight to soothe investors. In fact, you could argue things seem even more grim this morning," wrote JJ Kinahan, chief market strategist at TD Ameritrade, in a Friday research note. "The travel ban and so many big events closing or being limited in scope seem to have ratcheted up worries about a recession."

Stocks tanked throughout Thursday as Trump and lawmakers negotiated over a bill to boost the government's virus mitigation efforts and shore up economic protections for the most vulnerable Americans.

The market rebounded slightly after the Federal Reserve announced it would offer $1.5 trillion in short-term loans meant to stabilize financial markets, but sunk again as lawmakers struggled to strike a deal.

The Democratic-led House was set to vote on a bill Thursday morning with the hopes of forcing the Senate into action before a previously scheduled congressional recess. The Democratic bill included provisions to ensure paid sick leave for all workers, expand unemployment insurance, guarantee free coronavirus testing and expand federal food assistance for low-income families and children.