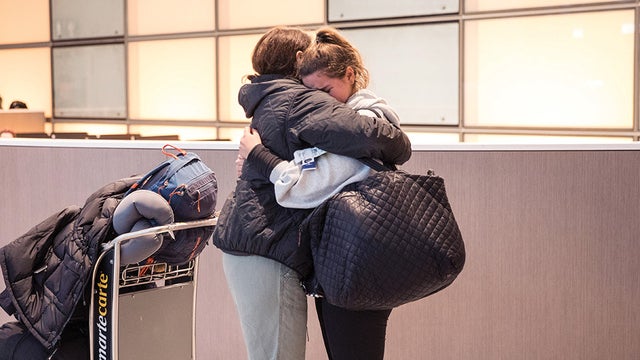 The State Department is facing the unprecedented challenge of trying to bring home thousands of Americans stranded around the world, as countries shutter their borders to stop the rapid spread of coronavirus.

The U.S. is tracking some 13,500 citizens abroad who need help getting home, according to a senior State Department official.

But despite nearly a dozen successful evacuations of tens of thousands of U.S. citizens from conflict zones and humanitarian disasters over the years, their current efforts are coming under fire, as other countries have already evacuated hundreds, if not thousands, of their citizens in the same situations.

The Department has allocated funds for at least 16 flights over the next five days; are working with mission groups to help evacuate Americans; and are encouraging private airlines to increase flight options, the official said.

On Monday, President Trump opened the daily coronavirus task force briefing at the White House by highlighting a successful return.

Trump told reporters that the U.S. had brought home 103 Americans, many of them senior citizens, who were stranded for 10 days in Brazil following a cruise.

To date, the State Department has brought home more than 5,000 Americans from 17 countries, including 800 people from Wuhan, China, in the early days of the coronavirus outbreak and 300 Americans from the Diamond Princess cruise ship that was quarantined in Japan.

Yet former officials at the agency say the hollowing out of career foreign service officers from senior level positions has deprived the department of the experience needed to face the current situation.

In the absence of actionable information from embassies abroad, travelers have organized themselves to share information, explore options like private and chartered flights and launch a pressure campaign on government officials.

That group includes more than 2,500 Americans still in Peru, with the first U.S. evacuation flights taking place nearly a week after the government announced its last minute border closures.

In Morocco, it's unclear if repatriation flights are ongoing. More than 1,000 Americans left the country on March 20, culminating five days of uncertainty and confusion over whether the U.S. government would step in to help.

In Honduras, a military charter evacuated a U.S. women’s football team on March 20 but hundreds more Americans remain in the country since its border shut on March 15.

Among the stranded are 16 members of a missionary group from a West Virginia church, whose volunteers range in age from 13- to 73-years-old.

“We generally were greeted on official websites with unanswered phone calls and unanswered emails from the State Department,” Dr. Dennis Allen, the delegation leader of the Morgantown Church of Christ group, said in a voice note recorded March 22 and shared with The Hill.

“Our political leaders were fairly quick to respond and did provide us some information, and sought information from us, and did seem to be actively trying to assist us.”

Their frustrations with the State Department are echoed by Americans around the world stuck in countries that have shut their borders. Adding to their stress is each country’s own version of a national quarantine, with armed police in Peru and Honduras patrolling the streets and harassing people if they try to go to the supermarket or pharmacy.

State Department policy is to have U.S. citizens exhaust all commercial options of travel before chartered evacuation flights can be considered.

But the short-notice border closures have caused mass confusion. Countries announcing one or two-week border closures aren’t guaranteed to reopen, with airlines opening up and then canceling flights.

Other countries – like Israel, Germany, France, the U.K. and Mexico — have evacuated their citizens in multiple flights in the first days of the closures. Both Morocco and Peru closed their borders on March 16.

Senate Democrats have raised the alarm that in addition to Morocco, Peru, Honduras and Guatemala, they are hearing from citizens in countries like Argentina, Cambodia, El Salvador, Japan and Uzbekistan.

A senior State Department official said that option isn’t needed at the moment.

Republicans in both the House and Senate have yet to publicly address the challenges of their constituents, although some Americans abroad say they’ve received responses from the offices of Sens. Shelley Capito (R-W.Va.) and Marco Rubio (R-Fla.).

“Our nation faces unprecedented challenges, including the repatriation of American citizens stuck abroad,” Rubio wrote in an email to The Hill. “Our constituent services team is tracking numerous cases in approximately a dozen different countries, and remains in daily contact with the State Department and relevant embassies and consulates.”

Michele Thoren Bond, who served as assistant secretary for consular affairs between 2015 and 2017, which is charged with organizing evacuations, said the State Department is making the best of a bad situation.

“Whatever has been accomplished has been the best thing they could do with the circumstances they’re dealing with,” she said. “And these are people who are really smart and resourceful and literally working around the clock until the crisis is over.”

Other former State Department officials say it’s evident the agency was slow to respond to the unfolding crisis and worsened by a hollowing out of career foreign officers at the agency.

Despite the extraordinary situation, it’s not the first time the agency has had to pull off mass evacuations from dangerous situations.

In 2006, the State Department organized the evacuation of 15,000 Americans from Lebanon following the outbreak of war between Hezbollah and Israel.

Four years later, the U.S. launched Operation Unified Response to evacuate 16,000 Americans from Haiti after the island nation was devastated by a 7.0 magnitude earthquake.

“The parallel to this world wide virus epidemic, in my mind at least, would be something like a natural disaster and which we’ve always moved as fast as we could to assist American citizens getting out of harm's way,” the former official said.

Jesse Curry, a U.S. citizen who is stuck in Lima with his wife, two kids and mother, said the uncertainty over when and how they’ll be able to get home has been the toughest part of the whole ordeal.

“For days we felt abandoned, worried that the quarantine would be extended and that we’d have no way out for months,” he said. “We’re just starting to receive daily updates, but we still have no idea when we’ll get to come home.”