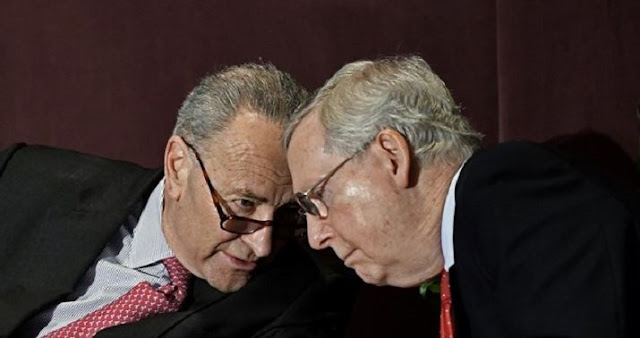 The Senate unanimously passed a massive stimulus package late Wednesday night in an effort to jump start an economy decimated by the coronavirus pandemic.

The bill provides more than $2 trillion for workers, small business and industries impacted in recent weeks by the virus.

Senate Majority Leader Mitch McConnell (R-Ky.) compared the efforts by Congress to combat the coronavirus to being on a “war-time footing.”

But the bill marks an unprecedented attempt by the federal government to revive the economy and prevent a deep recession. The 2008 Troubled Asset Relief Program (TARP), by comparison, was $700 billion.

Congress has been under intense pressure to pass a third round of coronavirus relief funding as the United States saw a steady uptick of cases, which has rattled the markets and upended day-to-day American life. The Senate’s vote comes one week after they passed a $104 billion “phase two” coronavirus package.

The 96-0 vote came only 20 hours after congressional leaders and Treasury Secretary Steven Mnuchin announced that they had clinched an agreement after more than four days of around-the-clock negotiations that kept lawmakers in the Capitol late into the night every day since Friday.

Senate Minority Leader Charles Schumer (D-N.Y.), who spearheaded the final days of talks with Mnuchin, characterized the agreement as a compromise for both parties and urged his colleagues to move quickly.

The wide-reaching bill includes a $1,200 one-time check for individuals who make up to $75,000. That amount would scale down until it reached an annual income threshold of $99,000, where it would phase out altogether.

It also provides $377 billion in small business aid, would defer federal student loan payments through Sept. 30, 2020, and would prevent money given under the bill to the Pentagon to be transferred to the border wall.

Americans are being encouraged to “social distance” and some states have enacted wide-ranging orders to try to prevent the spread of the disease. To help address those changes, the bill also provides $100 billion for hospitals and $200 billion for other “domestic priorities,” including child care and assistance for seniors.

The United States had 62,086 confirmed coronavirus cases as of late Wednesday afternoon, according to John Hopkins University.

But Scott, of South Carolina, Graham and Sasse warned in a joint statement that they would “oppose the fast-tracking of this bill unless this text is addressed.” The GOP senators asked for an amendment vote to cap unemployment benefits at 100 percent of salary. If they got their vote, they said, they would let McConnell speed up the bill.

In response, Sen. Bernie Sanders (I-Vt.) warned that unless they dropped their demand he would also place a hold on the bill until language was ensure “stronger conditions are imposed on the $500 billion corporate welfare fund to make sure that any corporation receiving financial assistance under this legislation does not lay off workers, cut wages or benefits, ship jobs overseas or pay workers poverty wages.”

Under Senate rules any one senator can slow down the bill, delaying its passage for days. In the end, McConnell gave the GOP senators a vote on their amendment, which failed 48-48. Sixty votes were required for it to pass.

The unemployment provision wasn’t the only issue still being ironed out on Wednesday. Appropriators disclosed on Wednesday afternoon that they had agreed to include more than $15 billion in new Supplemental Nutrition Assistance Program (SNAP) funding, which was a huge priority for House Democrats.

“Overnight and into today some various final matters were discussed and ultimately resolved,” said Eric Ueland, the White House director of legislative affairs.

Negotiators also worked through the night Tuesday to finalize the language on the hundreds of billions in aid for impacted industries. The 700-plus page bill includes a $500 corporate liquidity fund to corporations; $25 billion would be set aside for U.S. airlines, $4 billion for air cargo carriers and $17 billion for other distressed companies related to critical national security.

And the bill was still being tweaked down to the final hours of the Senate’s debate, with multiple pieces of legislation alleged to be the “final draft” circulated. The text of the bill was filed at 10:03 p.m. on Wednesday.

Asked about the delay, Ueland said that “continuing to see and review legislative language and continuing to make sure that everyone was comfortable with the pieces that were outstanding after the deal was announced last night.”

The bill now heads to the House, where lawmakers are still debating how they will take it up as members in both parties have pushed back against the idea of clearing it by unanimous consent.

In a letter to Democrats Wednesday, House Majority Leader Steny Hoyer (D-Md.) vowed that leaders would provide lawmakers with at least 24 hours' notice before taking action. With the Senate passing it late Wednesday night, that would set up a House vote for Friday at earliest.

Leadership is looking for a way to pass the bill and avoid bringing all members back to Washington, D.C., meaning they could either pass it by consent or a voice vote.

House Minority Leader Kevin McCarthy (R-Calif.) is pressing for the latter, warning Wednesday that some of his members want the opportunity to be on the floor voicing their objections.

"I don't think this can pass on unanimous consent," he said.

Pelosi told reporters on Wednesday that a voice vote was a “possibility.”

“What I would like to see, because this is a $2 trillion bill, I’d like to see a good debate on the floor. I’m so proud and dazzled by my committee chairs,” she said. “People will say yes or no on either side, and then we’ll take a voice vote.”