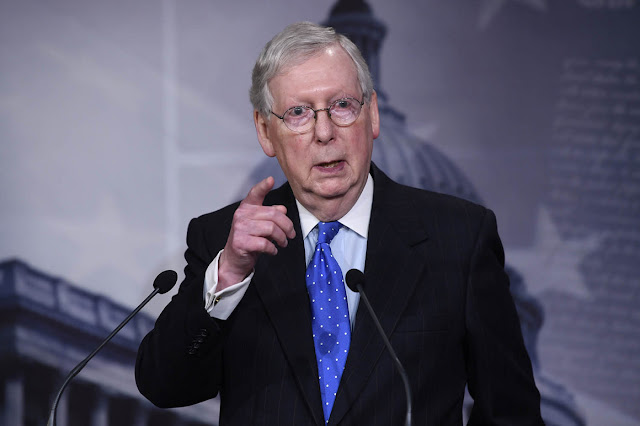 Senators are racing the clock as they try to clinch a deal on a massive stimulus package to address fallout from the coronavirus outbreak rattling the nation.

The Senate is holding a rare weekend session starting at noon on Saturday for lawmakers to attempt to hammer out an agreement on a bill that is expected to cost at least $1 trillion.

Senate Majority Leader Mitch McConnell (R-Ky.) had set a midnight Friday deadline for Congress and the White House to reach a deal “in principle” — a tall task for bipartisan negotiations that started in earnest earlier Friday morning.

While negotiators said they’ve moved toward an agreement, they missed that deadline amid ongoing talks over several key provisions. Now, senators will reconvene late Saturday morning as they push toward a deal.

"There's been a lot of near consensus throughout all the working groups," said Eric Ueland, the White House director of legislative affairs, adding that "there are a lot of details" that could be locked down on Saturday.

McConnell, according to negotiators, wants legislative text by mid-afternoon, giving them only hours to try to finalize an agreement.

Congress is under intense pressure to act quickly as the coronavirus has spread across the country and rocked the economy. There are now more than 19,600 cases and at least 260 deaths in the U.S., according to data from Johns Hopkins University. The economy, meanwhile, has cratered with the Dow Jones Industrial Average dropping 9,000 points in the past month.

Lawmakers, their staff and top administration officials spent roughly 12 hours on Friday behind closed doors as they tried to get an agreement on the broad contours of the trillion-dollar stimulus package.

The talks are focused on four areas of an agreement: tax, health care, small businesses and impacted industries like airlines.

Negotiators suggest that they are closer to a deal, including moving toward resolving key sticking points like a GOP proposal to send individuals a one-time check and a Democratic demand to expand unemployment insurance ahead of an expected major spike in jobless claims.

Ueland told reporters that “tremendous” progress had been made on the debate over unemployment that there was bipartisan support for keeping the rebate checks in the final agreement.

“Nothing is agreed until everything is agreed to,” Ueland said, but “we're very gratified to hear … bipartisan interest or some consensus that we need to act and provide direct relief.”

Both senators and administration officials are expected to return to the negotiations with a better sense of how their respective sides could support the ideas under discussion.

Sen. Ron Wyden (D-Ore.) mentioned that he wanted to check with colleagues, as well as the House, while Treasury Secretary Steven Mnuchin needed to run ideas under discussion by the White House.

"Both sides have some issues that are important priorities that just take some time to check," Wyden said.

Ueland added that the Congressional Budget Office “needs to give us some answers on dollars and cents” in relation to the proposal being discussed on unemployment insurance.

The agreement under discussion would provide one round of $1,000 checks to eligible adults at a cost of approximately $250 billion and match that with a similarly costly expansion of unemployment benefits, according to two sources familiar with the talks.

The sign of progress comes as the idea of rebate checks has emerged as a primary hurdle to getting an agreement.

The original Senate GOP plan would have provided a check of $1,200 to individuals who make up to $75,000 per year. The amount would have been scaled back until it hit an income level of $99,000 per year, where it would have phased out completely.

But some Senate Republicans raised concerns about the provision because it would have resulted in Americans with little or no tax liability getting a significantly smaller check—$600. And Democrats also pushed back, arguing that unemployment insurance must be expanded to provide stability beyond a one-time payment.

Another sticking point that emerged on Friday was a Democratic request for stabilization funds, which states could fall back on if their economy worsens due to the coronavirus. Senators were also still debating how to move a separate $46 billion supplemental request from the Office of Management and Budget (OMB).

Senate Minority Leader Charles Schumer (D-N.Y.) told reporters early Friday night that there were “significant issues” on the table, including the state money, but he hoped that a deal could be reached on Saturday.

"I think we're making good progress but I think it's a big complicated huge bill," he said. "And … I would hope we could come to agreements tomorrow."

Most of the attention Saturday will be on the tax working group led by Sen. Chuck Grassley (R-Iowa), the chairman of the Finance Committee, and Wyden. Senators involved with the other three groups—small business, healthcare and impacted industries—indicated Friday that they were largely in agreement.

If lawmakers are able to clinch an agreement on Saturday, they are expected to spend the rest of the weekend drafting and ironing out the final details.

McConnell has set an initial procedural vote for Sunday on a “shell” bill, essentially a placeholder that senators will swap the text of the stimulus package into once it’s finalized.

The GOP leader and the White House both want to pass the agreement on Monday. McConnell would need cooperation from all 100 senators to move that quickly, otherwise the bill could get dragged out until late into the week.

Sen. Pat Toomey (R-Pa.) added that there was an “urgency” for Congress to act.

“I think it’s likely that there will be a vote early next week. ..The Leader has said it’s going to be Monday,” Toomey told CNBC, adding that lawmakers were under “pressure” to be ready by early next week.

No senator has said, yet, that they would slow down the stimulus package. But the GOP leader has had to cut deals with members of his own caucus on the previous two stimulus packages in order to let them skip over procedural hurdles.

Sen. Rand Paul (R-Ky.) has forced amendment votes on the two previous coronavirus packages, putting him as a potential early hurdle for McConnell.

The GOP senator announced on Friday that he would introduce his own coronavirus bill that includes a 60-day payroll tax holiday and would replace the paid sick leave with expanded unemployment insurance.

“The national emergency we face may be new, but the answers out of Washington have so far been the same: more spending, more debt, and more mandates on the American people,” Paul said.

If senators aren’t able to finalize a deal, Ueland said that staffers had to begin drafting legislative text either way in order to meet McConnell’s deadline.

But Democrats were deeply critical of the Senate GOP proposal, signaling that it likely would not pass the Senate as originally drafted. House Speaker Nancy Pelosi (D-Calif.) also wrote in a letter to colleagues on Friday night that the GOP plan “as written” is a “non-starter.”

Rep. Hakeem Jeffries (N.Y.), chairman of the House Democratic Caucus, said House Democrats, who are currently compiling their own stimulus proposals, will be pushing for "a bottom-up approach," featuring more funding for programs designed to help students, seniors, small businesses, working class families, and those facing eviction and foreclosure.