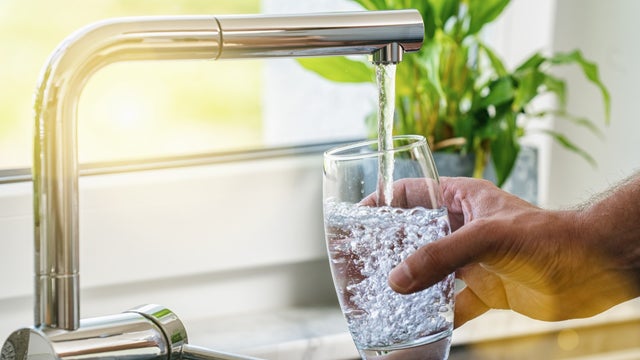 A recent report from the Pentagon says it may take decades to remove toxic “forever chemicals” from the water supply near military bases following a surge in the number of sites with suspected contamination.

The Defense Department now has 651 sites it suspects could be contaminated with PFAS, a class of chemicals used in a number of everyday products and in fire fighting foam used by the military.

That’s a more than 50 percent jump from earlier tallies, an increase revealed in a report this past week from the Pentagon’s PFAS Task Force.

Now the military must test each site for PFAS, identify how the chemical has spread and craft a plan to remove it -- a process that could stretch over 30 years.

“We’ve been pretty clear that the 651 [figure] is where [PFAS] may have been used, which means we need to go in and investigate. So we just don’t know at this point that at all 651 there has been an actual release into the environment,” Maureen Sullivan, the deputy assistant secretary of Defense for environment, told The Hill.

The Pentagon has been under increasing pressure from lawmakers and environmental groups to clean up the so-called forever chemicals that bioaccumulate in the environment and in human blood. PFAS has been linked with cancer, hormone disruption, liver damage and infertility.

The timeline by the Department of Defense (DOD) shows it will take anywhere from six to 13 years before DOD will begin cleaning up PFAS. The Pentagon needs to evaluate the speed of the contamination and how to best clean it.

Once the cleanup process begins, it can take anywhere from one to 30 years.

“They’re not treating the cleanup of legacy PFAS contamination with the right amount of urgency.”

DOD’s timeline follows the steps required under the Superfund law, which dictates the clean-up process for hazardous waste sites.

Betsy Southerland, who was director of the Office of Science and Technology at the Environmental Protection Agency’s (EPA) Office of Water during the Obama administration, said DOD’s timeline overestimates the time needed to complete certain steps.

In cases where contamination is already known, she said, DOD should be able to proceed more quickly. And in cases where DOD still needs to do an initial analysis, it shouldn’t take up to four years, as prescribed by the agency, to decide on a course of action, Southerland said.

Most of the contamination is in groundwater, meaning DOD will have to pump groundwater, treat out and then refill the aquifer, a process that will need to be replicated at site after site.

“It’s pretty much a foregone conclusion now that they will have to do a groundwater pump and treat,” she said. And while each site will require tweaks, “it’s a much more standardized remedy than what they’re implying here.”

The report and its estimated timelines unnerved some lawmakers who have been pressing the Pentagon for swift action.

“The more we test, the more contamination we will find. Further inaction from the Department of Defense is unacceptable,” Rep. Debbie Dingell (D-Mich.), one of the most active voices in Congress on PFAS issues.

“The military needs to step up and take aggressive measures to not just to identify these forever chemicals, but to clean up these harmful chemicals and transition to the use of safer alternatives moving forward, otherwise more will be poisoned and our long-term national security is at increased risk,” she added.

Sullivan said DOD is able to act more quickly when water has tested above the 70 parts per trillion (ppt) recommendation set by EPA.

Sullivan cited a recent example where the military paid to connect a trailer park to the city water supply after the park’s groundwater was affected by a nearby base. In other cases, DOD has provided bottled water or filters to affected households.

But critics say even with swift action in some communities, the risk for those drinking water under the 70 ppt level is still too high.

In the absence of a federal PFAS standard, many states have implemented their own regulations, levels far closer to 10 ppt.

“Everyone in America is learning the importance of a healthy immune system this week, so why on earth should anyone stationed at a DOD installation be drinking water contaminated with a substance we know weakens the immune system?” Faber asked.

There’s also concern some water won’t be treated at the 70 ppt level.

Language in the recent Pentagon report indicates the military would not follow EPA’s 70 ppt guidance for treating groundwater that isn’t already a source for drinking water and would instead come up with its own treatment guidelines.

That’s problematic, Southerland said, because that same water might be needed for drinking water in the future.

“They’re giving themselves discretion,” she said. “And we don’t know what that level is going to be.”