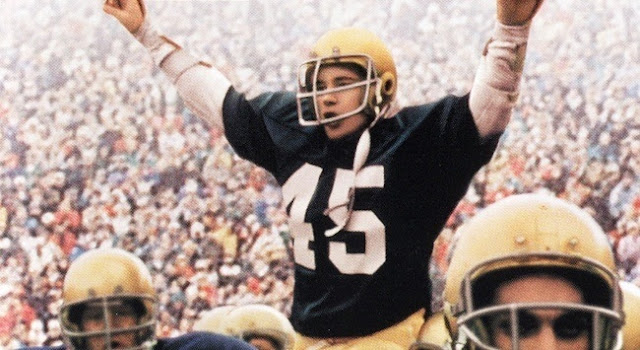 The Center for Learning Disabilities (CLD) at West Texas A&M University will host renowned-speaker Daniel “Rudy” Ruettiger for “A Celebration of Extraordinary Minds” at 5 p.m. Thursday, April 2 at the Jack B. Kelley Student Center, Legacy Hall. Ruettiger’s speech “Yes, I can” is a ticketed dinner event and reservations can be made here.

Ruettiger is widely-known for his time on the University of Notre Dame football team in 1975. As depicted in the 1993 movie “Rudy” by David Anspaugh, his only playing time was 27 seconds against Georgia Tech in which he sacked the quarterback. For many years, Ruettiger was the only Notre Dame football player to be carried off the field in celebration.

Much of Ruettiger’s acclaim stems from his unwavering perseverance to attend and play for Notre Dame despite his learning challenges with dyslexia and 5’6” height. Notably, Ruettiger was admitted to the University after his fourth attempt, and he was able to play on the scout team, a squad that helped the varsity team with players like Knute Rockne, Paul Hornung and Joe Montana practice. Though “Rudy” was not the top grossing film the year it released, it has grown in popularity and become a cultural icon in regards to not only sports, but grit and inspiration as well.

Ruettiger received an honorary doctorate degree from Our Lady of Holy Cross College, the Distinguished American Award from the National Football Association, and proclamation of Official Rudy Award Day from the Governor of Nevada. He spoke at the White House during both the George W. Bush and Bill Clinton administrations, and last year, Nick Nanton directed the Broadway rendition of the Emmy Award-winning documentary “Rudy Ruettiger: The Walk On” at the Samuel J. Friedman Theatre.

“The pursuit of an education is one of the most empowering stories to tell, and for it to come from Rudy through his illustration of trying experiences with learning and sports is an exciting event for the entire community,” said Puff Niegos, founder and board president of the CLD. “WT is fortunate to have the Center for Learning Disabilities and its ability to bring talented and inspiring speakers to the Texas Panhandle to tell stories of overcoming adversity for bright futures.”

In 2010, the CLD was established when the parent of a child with learning disabilities met with the dean of the college of education and social sciences at WT to discuss the needs of families affected by learning disabilities. In 2013, the Texas A&M University Board of Regents designated the community partnership as a Center of Excellence.

For more information about the event or the WT Center for Learning Disabilities, contact 806-651-2335.