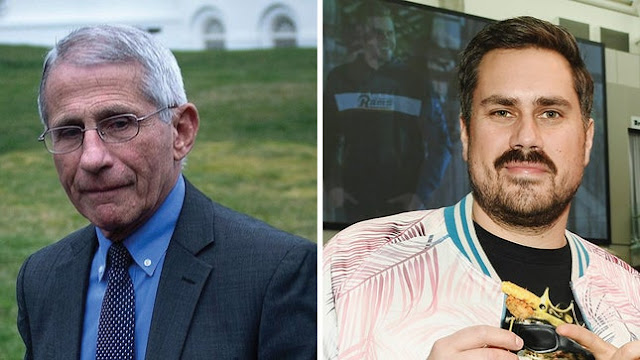 One is a 79-year-old physician who was at the forefront of combatting the HIV/AIDS outbreak nearly four decades ago and is now the government’s top infectious diseases expert.

The other two are in their mid-30s and rose to internet stardom as hosts of “Pardon My Take,” a satirical sports talk show wherein they debate the latest news in the sporting world and feature recurring bits like a listener question segment titled “Guys on Chicks.”

This week, the three came together to spread awareness about the coronavirus to the podcast’s primary demographic: millennials.

Fauci issued a direct appeal to the younger generation of Americans during a 40-minute interview on the podcast, casting them as a critical factor in protecting the elderly population from the coronavirus and urging them to heed advice to limit their contact with others.

“The problem is, we need the young people to help us to protect the vulnerable because when an individual who is young gets infected and either has no symptoms at all or even mild symptoms, that individual would continue the virus spreading in the community,” Fauci said.

“You’re not a passive person in this. You are an important part of the active plan to contain this epidemic,” he continued. “We really do need you, this isn’t something that can be successful without you.”

Fauci used the interview to explain the origins of the virus and field serious questions about the outbreak as well as lighter ones on his affinity for running.

The appearance of Fauci, director of the National Institute of Allergy and Infectious Diseases and one of the more prominent members of President Trump’s coronavirus task force, on a podcast geared toward millennials is part of a broader push by the administration to appeal to the age group as officials look to stem the spread of the coronavirus.

White House officials have in recent days identified millennials — those born in the 1980s or early 1990s — as the make-or-break age group that could determine how dire the coronavirus pandemic becomes in the United States.

Millennials have generally shown low susceptibility to the virus, but public health experts warn that they are the most likely to spread it to older relatives and those with underlying conditions who are most vulnerable.

Birx later told reporters Wednesday that the White House is concerned about early reports from France and Italy of some young people falling very ill, warning that the virus could infect a “disproportionate” number of America’s largest generation.

A State Department HIV/AIDS expert, Birx acknowledged Monday that it can be difficult to excite young adults through government press briefings and fact sheets. But Birx, a mother of two millennial women, put the onus on that generation to take action.

“I will tell you what I told to them,” Birx said, referring to her children. “They are the core group that will stop this virus.”

Members of the White House coronavirus task force this week issued appeals to younger Americans from the briefing room podium, through social media and via more unconventional means, as evidenced by Fauci’s collaboration with the controversial Barstool Sports.

The White House’s new focus on millennials also comes as pictures circulate showing Americans enjoying Florida beaches on spring break despite warnings from the federal government to avoid crowds. There have also been reports of young people in Europe defying lockdown orders and holding large parties despite the outbreak.

The White House reached out to Pardon My Take on Monday about having Fauci on the show, and the hosts were immediately on board with the idea, the vice president’s office said. Pardon My Take has a loyal following consisting mostly of young adult men who may otherwise miss critical information about the virus and its transmission.

The White House on Tuesday tweeted out a video of Surgeon General Jerome Adams directly addressing millennials and explaining their role in halting the spread of the coronavirus.

Officials are trying to get Birx on The Morning Toast, a self-described “millennial morning show” with tens of thousands of followers on YouTube and Instagram, and getting the surgeon general on Cheddar TV as they explore ways to disseminate information about the virus and new guidance urging Americans to limit gatherings to fewer than 10 people and avoid bars and restaurants.

Trump, who has drawn criticism for previously downplaying the severity of the virus, used White House briefings this week to note multiple times that younger individuals can spread the virus even if they experience insignificant symptoms. The remarks came amid what many have observed as a shift in the president’s tone as the cases of coronavirus rise in the United States.

"They're feeling invincible ... but they don't realize that they can be carrying lots of bad things home to grandmother and grandfather and even their parents,” Trump said Wednesday. “So we want them to heed the advice. We mean the advice, and I think it's getting through."