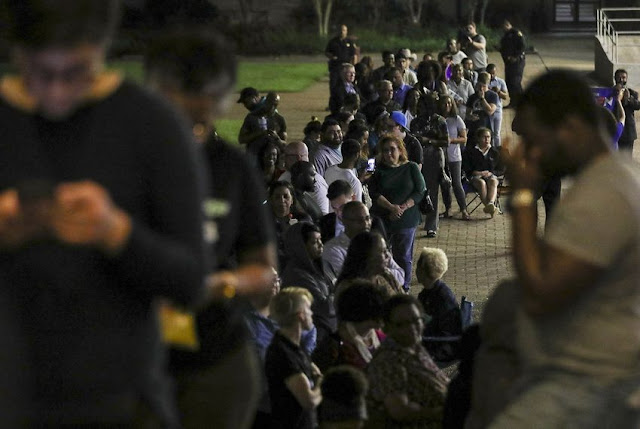 Florida is famous for botching elections. Iowa Democrats made a strong bid for that distinction in their caucuses last month. And now, for some reason, Texas is competing for the title.

If people are still in line to vote three hours after the polls are supposed to close, you're not doing things right. Texas ought to be better than this at democracy. It’s not a partisan slap, by the way: Republicans are at the top of the state’s executive branch, coordinating, regulating, helping and sometimes interfering with the election officials in the state’s 254 counties. But a lot of those local election administrators are Democrats — including in the big counties where many of this primary election’s dumpster fires blazed into the night.

Blame them all. This is operations, not ideology. The system they’re running is supposed to record and report our choices and instructions on the people who govern us. Fast, efficient, accurate, secure and convenient elections ought to be sort of boring. The news is supposed to be in the results, not in the process. That's how you build confidence in the system. Last night's bobbles and fumbles undermine it.

Tell that to the people who were in line before 7 p.m. on election night, but who voted six hours after the close of the polls at Texas Southern University. It’s impossible to believe that nobody threw up their hands and went home, or looked at the lines and decided to strike voting off their list of things to do this year.

The lines made it harder to vote, not easier, forming an impediment to civic action and a mechanism for suppressing votes. It made no difference last night whether that was intentional. It was and is undemocratic.

It doesn’t stop there. You can’t count votes that haven’t been cast. The long lines there and elsewhere delayed tabulation of the votes.

Not that the tabulation was worth singing about.

The morning after the election, the Texas secretary of state’s office had Democrat Mike Siegel winning his primary in the 10th Congressional District with more than 70% of the vote, mainly because the state thought he got 92,706 votes in Travis County. But Travis County’s election results said he got 24,582. That put his final tally at 48.1% — meaning that instead of a win, he faces a May runoff with Pritesh Gandhi.

State Rep. Harold Dutton, D-Houston, is on his way to a runoff with Jerry Davis, after a fumbled set of election night numbers were sorted out. The night before? Dutton had two more votes — two! — than he needed to avoid a runoff, according to the secretary of state’s office. But though both were billed online as full results, Harris County’s tally had a much larger vote count than the secretary of state’s office, and had Dutton receiving 45.2% to Davis’ 25.3%. It’s a runoff.

Those aren’t fatal mistakes, but they’re the kind of mistakes that raise suspicions about how well elections are being run — especially on a night with long lines and slow results and with trolls across the political spectrum spinning election conspiracy tales. It took even longer to get accurate counts — including from three of the state's biggest counties.

Some blamed voters for waiting until election day to cast their ballots, when Texas offered 11 days of early voting. It’s true that voting early avoids the last-day traffic jams, but this year’s early voting Democrats were making their decisions with much different information than the Democrats who waited.

The last-day voters watched a developing race. Candidates who were still in it on the first day of voting weren’t running — though their names were on the ballot — on Tuesday.

It’s no surprise that lots of people vote on election day. That’s how it got its name, right? In the same way that fast-food restaurants staff up for lunch and dinner, that stores are ready for the holidays, and the officiants at church put on their robes and garments on Sunday morning, the people who run elections ought to be ready to receive voters on the day of the month when the greatest number of people vote.

Election administrators who don’t know what they’re doing are in the minority, but problems get attention, and at a time when so many are questioning results and security and access to the polls, those problems taint the whole process. In his just-published “Election Meltdown: Dirty Tricks, Distrust, and the Threat to American Democracy, political scientist Rick Hasen puts official ineptitude high on his list of concerns.

The “pockets of incompetence in election administration have enabled both Democrats and Republicans to raise cries of rigged or stolen elections that appear increasingly credible to hardcore partisans,” he writes. “Even though most election administrators are doing an admirable and professional job, often under serious resource constraints, in close elections it is the weakest link among those who run elections that matters most. The problem happens with some frequency in large American cities, which are often controlled by Democrats.”

It doesn’t have to be like this, and it shouldn’t be like this. Texas should make its place among the best examples, among the most competent governments.

Elections are supposed to settle fights, not start them.