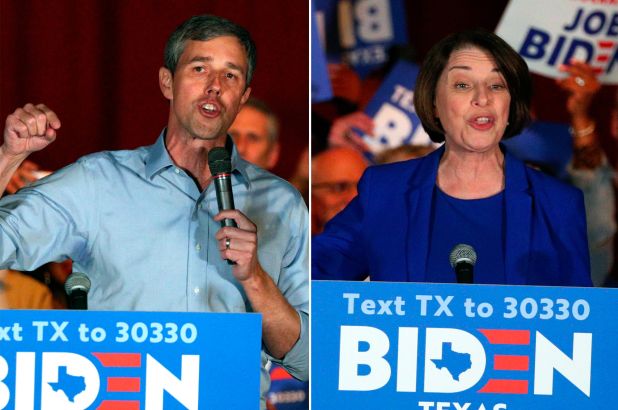 Standing next to the former vice president the same day she ended her own presidential bid, Klobuchar called for a return to "decency and dignity" in the White House.

"It is up to us, all of us, to put our country back together, to heal this country, and then build something even greater," she continued, before adding to cheers: "I believe we can do this together. And that is why, today, I am endorsing Joe Biden for president."

Biden thanked Klobuchar onstage moments later, telling a crowd that the senator "knows how to get stuff done."

"She really does. That's why Amy has never lost. And she's not losing now. You're going to hear a lot from Amy Klobuchar for a long, long time."

After cheers, he added: "That's why she's one of the most effective senators in the United States Senate."

During his rally, Biden addressed the need for the party to choose a "lifelong Democrat" who could unite the country, an apparent shot at Sen. Bernie Sanders (I-Vt.), the current front-runner for the Democratic nomination.

Biden was also joined by former O'Rouke, who added his endorsement to the growing list of former 2020 contenders joining Biden's campaign ahead of Super Tuesday.

"Ladies and gentlemen, tomorrow, March 3rd, 2020, I will be casting my ballot for Joe Biden," O'Rourke declared Monday.

"The man in the White House is an existential threat to our country, to democracy, to free and fair elections, and we need somebody who can defeat him, and in Joe Biden we have that man," he added.

After a rocky start to the primary season that saw many count the vice president out of the race, Biden has come roaring back, clinching a decisive win in the South Carolina primary last Saturday that jump-started his fundraising and seemingly prompted a flood of endorsements in recent days.

There had been deep concern within the party about the handful of centrist candidates remaining in the race splitting the moderate vote while the progressive wing coalesced around Sanders. With the exit of Buttigieg and Klobuchar, the party appears to be lining up behind Biden as an answer to the self-described democratic socialist.

Texas is expected to be a major battleground in Tuesday's primary contests, with Sanders polling in first place and Biden in second. The state awards 228 pledged delegates, the biggest haul outside of California.

O'Rourke dropped out of contention for the Democratic nomination last year after struggling for months to gain momentum. He previously narrowly lost a race for the Senate seat currently held by Sen. Ted Cruz (R-Texas).