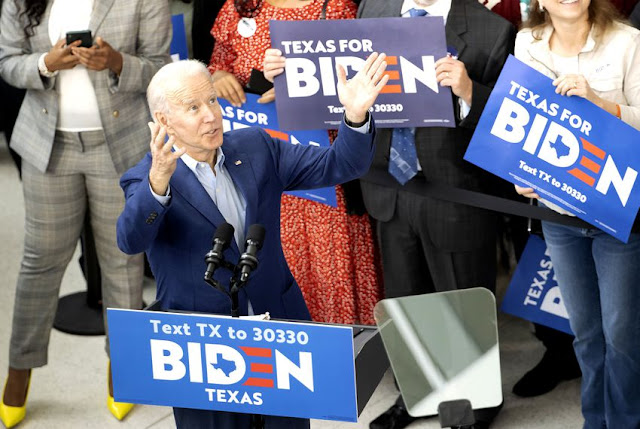 As Bernie Sanders and Joe Biden battled to the last vote for Super Tuesday’s second-largest electoral prize; amid the frenetic energy of a dozen-strong Democratic primary to take on an entrenched Republican incumbent U.S. senator; with the long voting lines and the slow reporting of returns; and with the numerous races tight enough to spark second-round primary runoffs, the results of Texas’ primary somehow proved rather routine.

It’s been a long primary election season in Texas, as in the rest of the country, as Democratic voters weighed a wide and ever-shifting field. But the chaos of election day and this long slog of a primary gave way to relative status quo when results were ultimately tallied Wednesday morning. Both parties delivered victories mostly to incumbents and establishment figures over unknowns and ideological challengers closer to their parties’ fringes.

In a surprising turnaround after a hasty show of unity in Dallas on Monday from the field’s moderates, Biden won the state. In two closely watched congressional primaries, incumbent U.S. Reps. Kay Granger, R-Fort Worth, and Henry Cuellar, D-Laredo, beat more extreme challengers. And no incumbent member of the state Legislature lost a primary, though at least two are headed to runoffs in May.

With a few major exceptions — incumbent Republican Railroad Commissioner Ryan Sitton lost in a surprising upset, and a provocateur known for his racist and sexist rantings online advanced to a runoff in a Republican State Board of Education primary — voters opted for stability in a state whose politicos already have their eyes trained on a bigger prize: the November general election.

Democrats have their best chance in years of taking back a majority in the Texas House, and some are bullish about the prospect of winning statewide races, too.

That optimism isn’t new. On Tuesday morning, even before the polls opened, Texas House Democratic Campaign Committee Chairwoman Celia Israel was looking far down the line, telling supporters she was eager for “candidates to take their dedication and fight into the general election this November. ”

The difference now: Each side knows what team it goes to war with.

For Democrats, that statewide ticket is overwhelmingly female. MJ Hegar, the choice of the Democratic Senatorial Campaign Committee, is headed to a May runoff to take on John Cornyn, the long-term Republican incumbent, in the November U.S. Senate race. The other Democratic contender in the runoff remained undetermined early Wednesday morning.

Across the board, women won contested primaries in high court races for Texas Supreme Court and Texas Court of Criminal Appeals. Chrysta Castañeda, the highest vote-getter in a four-way primary for Texas Railroad Commission, will compete in a May runoff with Roberto Alonzo, a former state representative from the Dallas area.

Political scientists and analysts said women were likely to succeed in low-information Democratic primary races as voters leaned on demographic cues they can glean from ballots.

President Donald Trump won his Republican nomination easily, as did Cornyn. In a surprising turn, Sitton was ousted from his perch on the state’s regulatory board for the oil and gas industry; meanwhile, Judge Bert Richardson looked likely to hold onto his seat on the Texas Court of Criminal Appeals amid a challenge from Waco attorney Gina Parker, who boasted the endorsement of former Gov. Rick Perry. The rest of the Republicans on the statewide ballot are incumbents serving on the state’s two high courts.

This year’s Republican primaries were notably less bloody than Texas’ have proven in the past as the state’s longtime majority party trains its attention on November. In two particularly tight Texas House Republican primary races, incumbents held on, at least for now. But intraparty warfare seemed quieter as the Texas GOP gears up for what may be its hardest general election battle in years.

“The stage is now set for the referendum of our lifetimes: Will Texans abandon the principles that have made our state the envy of the nation in order to live under the stranglehold of socialism?” Cornyn asked supporters in Austin as they celebrated over County Line barbecue. He pledged bipartisan appeal in the general election, and to welcome into the fold “Texans caught in the Democrat party’s civil war and repelled by socialism.”

The most important factor influencing Texas this fall — the top of the ticket — remains uncertain even after more than a dozen states voted this week. With a strong showing on Super Tuesday, Biden has reclaimed at least a shared frontrunner status, and the battle between him and Sanders could help determine the outcome for down-ballot candidates in Texas, too. Many in the Democratic establishment fear a Sanders presidential bid would doom down-ballot Democratic candidates, particularly in moderate suburban areas.

For now, Texas Democrats get a brief respite from the limelight — and time to prepare for a handful of May 26 runoff elections.