How do I participate in Libertarian or Green party primaries? 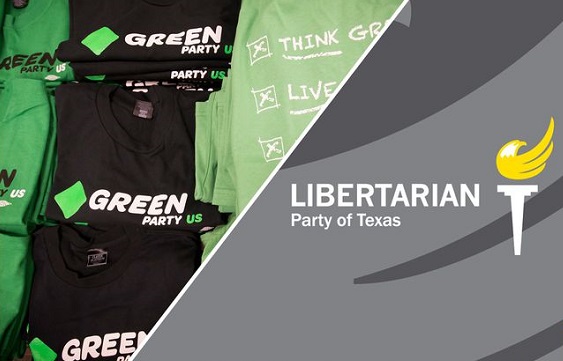 Hey, Texplainer: How do I participate in Libertarian or Green party primaries? How do I help select the candidate for those primaries if I'm not voting for Democrats or Republicans in March?

Super Tuesday is fast approaching, and thousands of Texas Democrats and Republicans will be casting votes tomorrow for candidates they want to represent their party when they face off in the November general election.

But what if you're not a Democrat? What if you're not a Republican? Members of the Libertarian and Green parties won't cast votes Tuesday for the primary. Instead, those voters hold conventions from March until July, where they cast paper ballots to nominate their preferred candidates for the November election.

The Green and Libertarian parties each hold a series of five conventions that begin a week after the March primary: a precinct, county, district, state and national convention where they choose their candidates, from local state lawmakers all the way up to president.

But voters cannot participate in the Green or Libertarian conventions if they vote in the Republican or Democratic primary this year.

What is the convention process like for each party?

But the local conventions aren’t available in every county. Only 82 counties in Texas are considered “Libertarian affiliated” and thus approved to host the precinct and county conventions. A list of the participating precinct conventions for Libertarians can be found here.

At the precinct level, voters can also elect state delegates who will represent them later to vote for the statewide candidates, party leadership and platform changes.

At the county convention, voters will cast ballots for their preferred nominees for races that fall within the county boundaries, like state legislative races and State Board of Education seats. If a candidate is running uncontested at any point in the convention process, there is a "none of the above'' option, so the candidate’s nomination isn’t guaranteed.

If there is a candidate running for a seat that crosses multiple counties — like Arthur DiBianca, who is running in U.S. House District 21, which includes 10 counties — there will be a district convention on March 21.

At the state convention from April 17-19, state delegates debate party business and presidential candidates. They will vote on statewide races including the U.S. Senate and Texas Supreme Court seats. Here, nominees are finalized and sent to the Texas secretary of state. Members will also vote on national delegates to represent them at the national convention to select the party’s presidential nominee.

A list of candidates can be found here. But the party allows any Libertarian-affiliated voter to show up at a convention and run for presidential office without filing first.

The national convention will be May 21-25 in Austin. Here, delegates will vote on the presidential nominee. The agenda that can be found here.

The Greens have all the same conventions as Libertarians, but all of the candidates, from local to presidential, are voted on and decided at the precinct convention March 10.

Janis Richards, Green Party state co-chair, said that “everything [after] is just a rubber stamp of the precinct convention.”

There are eight additional Green candidates in limbo because they failed to pay their filing fees to run. Their names will appear on the ballot, but the Texas secretary of state is suing to have their candidacies voided.

The March 14 county convention and March 21 district convention are more of a formality for the party; it will have already completed the nomination process at the precinct convention. A list of counties can be found here.

The state convention will be April 18-19.

The national convention is July 9-12 in Detroit and is where Greens will vote for their presidential candidate. An agenda can be found here.

Third-party officials encourage voters to get involved with the parties before the conventions by learning about candidates, contacting county chairs and visiting their websites. They also recommend looking into the parties’ values, which usually weigh heavily when electing nominees.

“In our country, you look at Netflix, you’ve got a million different shows to choose from, but somehow something as complex and deeply important as political values, views and principles, we think you either belong in box A or box B,” said Bekah Congdon, Libertarian Party chair in Bexar County. “And that’s just silly.”