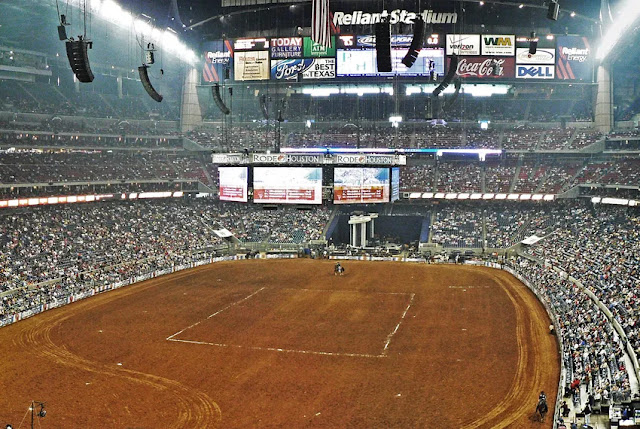 As Texas continues to grapple with the spread of COVID-19, Houston officials have called off the remainder of the city’s biggest annual event, the Houston Livestock Show and Rodeo.

The announcement came Wednesday amid a seven-day emergency health declaration in the state's biggest city, which comes after the state saw its first suspected case of community spread of the virus in nearby Montgomery County. It’s another devastating economic and cultural blow to another major Texas city as the state — which has more than 30 confirmed cases — continues to suffer the impacts of the novel coronavirus. On Friday, Austin canceled South by Southwest, the annual international festival of music, technology and film that brings hundreds of thousands of people from across the world to the state capital every March.

Now all eyes are on San Antonio, whose annual Fiesta celebration — a more than weeklong citywide spree — is still on for now, Mayor Ron Nirenberg said Wednesday.

"For those of us who are Texans through and through, and from our area, from our region, you know just how much we love the Houston Livestock Show and Rodeo. You know this decision has not come easily," Mayor Sylvester Turner said at a press conference Wednesday. "But the health and safety of the people in our region is paramount."

The cancellation robs Houston of an untold portion of the enormous economic boon brought every year by the event. Last year, the 24-day celebration generated $391 million in economic activity in the greater Houston area and attracted more than 2.5 million visitors.

This year, hundreds of thousands of people have already attended the event, which officially began March 2. One attendee, Houston-area officials said on Wednesday, seems to have been the Montgomery County man who local officials suspect may be the first known case of community spread of the virus. Harris County Judge Lina Hidalgo said officials believe he attended a Feb. 28 barbecue event, but are not sure whether he was showing symptoms at the time.

It’s a similar case with SXSW, which brought in a record $356 million in 2019 — and whose downstream economic effects are particularly critical for low-wage workers in the city. To blunt the impact of the cancellation, Mayor Steve Adler and other local officials exhorted locals to go out and support local businesses, particularly tipped workers hit hard, and also rolled out the Stand with Austin Fund.

The stakes are just as high in San Antonio, one of the state’s largest cities — which, because of its proximity to the Lackland Air Force Base, has been thrust into the debate about how to keep Texans safe from the spreading virus. Officials are continuing to monitor the situation, but so far, Fiesta is still set to begin early next month.

“Fiesta is five weeks away, and [it’s] probably really too soon to make any big decisions like that,” City Manager Erik Walsh said Wednesday.

Organizers said they are working with local health officials to take precautions like providing ample hand sanitizer for the event. A cancellation could be devastating: A 2017 study found that Fiesta supported 3,464 full-time-equivalent local jobs, mobilized 75,000 volunteers, contributed $340 million in sales to the local economy and attracted 2.5 million attendees.

Beyond impacts on their host cities’ economies, these events now risk their own bottom lines. Neither SXSW, the Houston Rodeo nor Fiesta has disease-specific event cancellation insurance — which is not uncommon for large events, even if they have some coverage to shield against financial disaster. That exposure could leave major events and conferences in Texas grappling with existential budgetary threats even after the outbreak’s immediate effects subside.

It’s just like car insurance: You can save money if you purchase the bare minimum, but if you get in an accident, “you may be out of luck,” said Camille Garcia, the director of communications for the Insurance Council of Texas.

“Most policies will not cover diseases, epidemics, pandemics. But there are endorsements you can purchase that will cover that extra piece,” Garcia said. “That’s not to say that that’s inexpensive by any stretch of the imagination. But it is indeed available out there.”

SXSW found itself in dire financial straits because it lacked disease-specific insurance, and it was forced to lay off as much as a third of its staff.

“We are planning to carry on and do another event in 2021, but how we’re going to do that I’m not entirely sure,” co-founder and Chief Executive Roland Swenson told The Wall Street Journal. “We’ve had to show our insurance policy to all kinds of people, and nobody ever said, ‘Hey, there’s a big hole here.’ ... We did not anticipate a pandemic.”

If the outbreak forces a cancellation, San Antonio’s Fiesta Commission — which is funded entirely by the private sector — may face trouble.

By the time the commission realized it might need insurance, Shaw said, it was too late to buy it.

“As soon as the peril was identified, you could no longer get insurance for it,” Shaw said. “It’s kind of like if your house is in a forest and the forest fire’s on its way, no one’s going to insure it.”

Earlier this week, before the Houston Rodeo was canceled, officials said that “due to the foresight of our Executive Committee and support of our 35,000 volunteer workforce, we are confident in the long-term viability of The Houston Livestock Show and Rodeo.”

Amid fears about the outbreak, CERAWeek, an annual oil and gas industry conference set to take place in Houston this week, was canceled. Last year, the event drew 5,300 delegates, including royalty, CEOs and industry titans from around the globe. Calling off that event, along with two others in Long Beach and New Orleans, meant a $50 million loss for organizers.

In Austin, public events of more than 2,500 attendees are prohibited until May 1 unless city health officials approve organizers’ “mitigation plans” for infectious disease.

City rules do not apply to University of Texas at Austin events because it is a state institution, but the university will weigh many of the same factors that play a role in the city’s decision-making, spokesman J.B. Bird said. Sporting events are so far still expected to proceed, but some events may be canceled, and the university is preparing to move all classes online if COVID-19 cases are confirmed in the Austin area.

MotoGP’s Grand Prix of the Americas, the motorcycle race set to take place in Austin in April, has been postponed until November in light of the outbreak.

The Texas Tribune Festival, set for Sept. 24-26 in Austin, does not have insurance for disease-related cancellations. A representative for the Austin City Limits Music Festival, an enormous outdoor event scheduled for October, did not return requests for comment.

Complicating matters for events scheduled for later in 2020: Insurers are unlikely to offer coverage that protects against coronavirus-related cancellations. Even if organizers do have coverage to mitigate the effects of other communicable diseases, policies may specifically exempt the novel coronavirus.

Still, even if they aren’t covered for cancellations, event organizers may find ways out of previously signed contracts with vendors or performers. “Force majeure” provisions in contracts can excuse participants from their obligations in the case of a disastrous, unpredictable event. Sprawling events like SXSW have hundreds of individual contracts to probe, and the language may differ among them.

It bolsters a company’s case that it can’t fulfill its obligations if a governmental authority makes some kind of emergency declaration or cancels an event entirely, as in the case of Adler in Austin.

Already, Chinese companies have begun attempting to invoke force majeure provisions, with at least one high-profile rejection. But it’s not clear how widely those designations will be accepted in the United States. Ultimately, disputed contracts will come before a court to decide.

Conferences have been canceled and postponed in San Antonio and Dallas, according to the cities’ tourism departments. But games and concerts are still on, for now, for the San Antonio Spurs and the Houston Symphony.