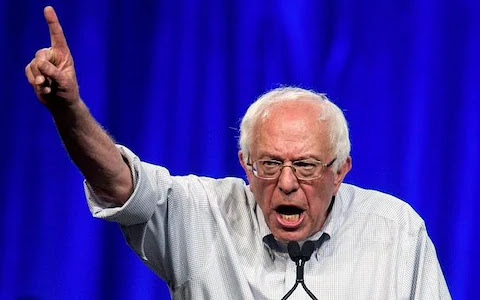 After being hammered for his long history of defending Communists — specifically for praising Cuba’s “literacy programs” — Democratic Party presidential hopeful Bernie Sanders is now employing the other age-old, and equally deceptive, defense of socialism.

At a Fox News Town Hall on Monday, Bernie was asked by a Russian immigrant and student from the University of Michigan: Could Sanders assure her that his brand of “democratic socialism” wouldn’t cause the same kind of harm that socialism always causes?

“What happened and existed in the Soviet Union was not socialism. It was authoritarian Communism,” Bernie replied, inducing a bunch of his historically illiterate fans to applaud.

The fact that there were varying degrees of socialist disasters is, of course, inarguable. Israel’s early socialistic experiment merely kept many people poor, while Russia’s socialism kept many people starving. Neither worked.

But leftists like Bernie like to act as if socialist ideology is incompatible with totalitarianism, when the opposite is true. The nationalization of industry and dispensing with property rights — necessary for any genuine socialism to occur — can’t be instituted without coercion and a centralized authoritarian effort. And even if the effort to redistribute property is first supported by the majority, as soon the state comes for your stuff — and it always does — the “democratic” part of the equation starts to dissipate.

Stalin’s five-year plans to collectivize agriculture, nationalize energy, and industrialize Russia were by definition socialist ventures. Mao’s Cultural Revolution was undertaken in part to destroy the entrepreneurship that had emerged when people tried to circumvent the collectivization of Great Leap Forward, another socialist venture.

So I don’t understand why anyone lets Bernie get away with describing the market economy of Denmark as “socialist” but places like the Soviet Union — Union of Soviet Socialist Republics, to be more exact — as not real socialism. Socialists think they can take credit for a “literacy program” but ignore Leninism, Stalinism, Maoism, Castroism, Baathism, Chavezism, the Khmer Rouge, etc. No one else gets to disregard the massive — sometimes genocidal — failures of their ideology by arguing that, actually, it had never been instituted correctly.  No one should.