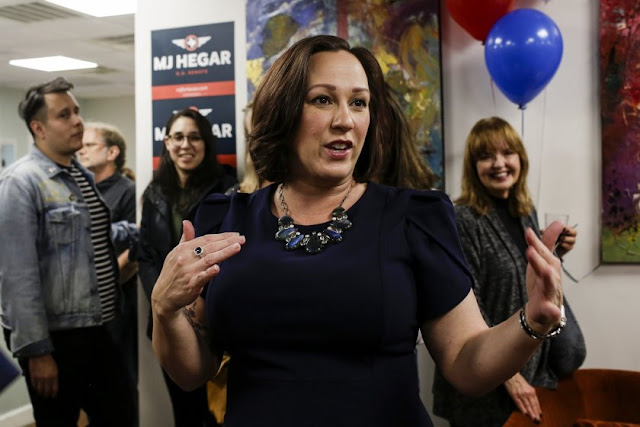 Afghan war veteran M.J. Hegar advanced to a May runoff election in the race to challenge Sen. John Cornyn (R-Texas) after she did not break the 50 percent threshold in the crowded Democratic primary.

The Associated Press projected Hegar would advance to the runoff. Who she will face off against in May was not immediately clear as results continued to come in early Wednesday morning amid reports of hour-long lines in some polling locations in Texas.

Coming into the primary, Hegar had been viewed as the front-runner and she had the endorsement of national Democrats.

But Democrats faced a packed primary field with more than a third of the voters still undecided leading up to Tuesday's election. An Emerson College/Nexstar poll released Monday, a day before the primary, found Hegar leading with 16 percent of the primary vote, but 39 percent of voters were undecided.

Democrats have in recent election cycles tried to move the once deeply red state in their favor. Former Rep. Beto O'Rourke (D) came close to defeating Sen. Ted Cruz (R-Texas) in 2018, losing by less than 3 percentage points in a race that gained outsized national attention.

But they'll likely face an uphill battle if they are going to unseat Cornyn. The Cook Political Report rates the seat as a "solid Republican."

Hegar said in a statement late Tuesday night that she is "heading into the runoff in the strongest position" to be able to beat Cornyn.

“MJ Hegar’s impressive performance is proof of the strength of her campaign and underscores that she is in the best position to flip this seat in November," Cortez Masto said in a statement. "She will only continue to build momentum and support in this critical race.”