Five things to watch on Super Tuesday in Texas 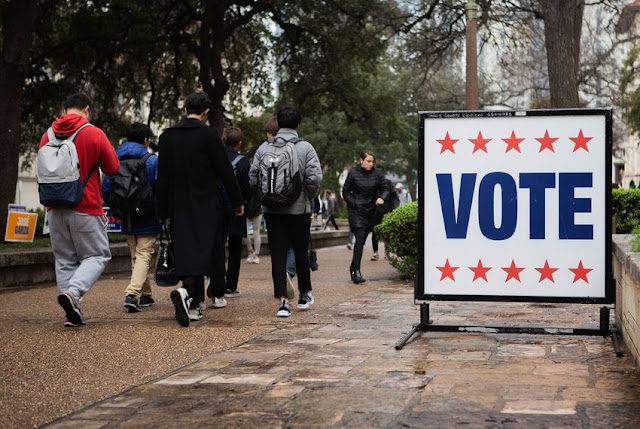 After months of campaigning and prognosticating, the time is here: It’s primary election day. Here are five of the biggest storylines to watch.

The effect of early voting on the presidential primary

We won’t know until the votes are tallied, but one of the most important factors in this year’s presidential primary will likely be timing: How many Democrats waited to vote until election day to account for changes in the race post-Nevada and South Carolina?

When early voting started in Texas on Feb. 18, former Vice President Joe Biden was faltering after weak showings in Iowa and New Hampshire. But on Saturday, after early voting ended in Texas, his campaign roared back to life with a dominant performance in South Carolina. Now he’s considered a frontrunner again.

According to Democratic analyst Harold Cook, 56% of votes cast in a Democratic primary in Texas are typically cast on election day. Cook estimates Tuesday will likely be a higher percentage because “some voters held off because the presidential race has been so fluid.”

And as we previously reported, some Texans — notably black voters — wanted to wait until Tuesday to vote so they can use South Carolina to assess candidates’ viability.

While early polls put U.S. Sen. Bernie Sanders in a healthy position ahead of Biden, former New York City Mayor Mike Bloomberg and U.S. Sen. Elizabeth Warren, few, if any, polls have been conducted since this weekend. And a lot has changed over the past few days: Biden can now claim to be the strongest alternative to Sanders. Tom Steyer, Amy Klobuchar and Pete Buttigieg are out, and several Democratic candidates are making their last-minute pitches to Texas voters.

Will Bloomberg’s big bet pay off?

As Biden celebrated a win in South Carolina and Sanders campaigned in Warren’s Massachusetts backyard, Bloomberg was looking ahead to Super Tuesday, preparing for a final get-out-the-vote event in San Antonio on Sunday evening.

“I’m just in time to wish you all a happy Texas Independence Day,” he told a crowd of roughly 600 in San Antonio. “I don’t know how to break this to you, but we don’t celebrate that in New York — but with your help, we are going to celebrate even more on Super Tuesday.”

Bloomberg has staked his campaign on Super Tuesday, eschewing campaigning the the first four states. And he’s spent millions in Texas in particular, in hopes of winning some of the 228 delegates awarded here Tuesday night.

But the biggest problem facing Bloomberg is that the South Carolina results — and Buttigieg’s exit from the race — punctured his campaign’s hope that the early states would create a muddled mess.

Now Biden and Sanders — Bloomberg’s biggest competition for Texas delegates — both have overwhelming leads in the chase for delegates, and Bloomberg is left playing catch-up.

But, as Bloomberg’s advisers have been quick to point out, the billionaire presidential candidate has the biggest campaign footprint in Texas. And in Texas, Sanders has been on the rise in recent polls, while Biden has fallen. Polls show Bloomberg on the cusp of reaching the 15% threshold needed to qualify for delegates statewide.

Whatever momentum Biden received after South Carolina might be limited in Texas, where he now has to compete with Bloomberg for statewide delegates. But in this year’s tumultuous race, it remains to be seen whether a bottomless budget can prevail.

Spoiler: It didn’t for Steyer.

The number of voters at the top vs. the bottom of the ballot

This year will be the first in Texas in which straight-ticket voting won’t be allowed in the general election. That’s never an option in primaries, but the vote totals could give a hint of the change's effect: In a year when excitement is high for the presidential race, how many Texans will make their way down the ballot after voting in the presidential and U.S. Senate races?

The straight-ticket voting question will also inform Democrats’ questions about how important the name is at the top of the ticket. Some members of the party’s establishment publicly bemoaned what a Sanders candidacy could mean for down-ballot gains — both on Capitol Hill and in the state Legislature.

Will establishment members of Congress prevail?

While U.S. Rep. Kay Granger, R-Fort Worth, may have years of congressional clout under her belt, she’s in real danger of losing her seat to a Tea Party-backed candidate.

Granger has the support of President Donald Trump, a leadership position among Republicans in the U.S. House and close ties to her community — but her race still appears fluid as she fends off a challenge from the right. Her opponent, Chris Putnam, has argued that despite Trump’s endorsement, Granger is insufficiently loyal to the president.

Granger isn’t the only powerful player on Capitol Hill facing a challenge from within his or her party. Farther south, U.S. Rep. Henry Cuellar, D-Laredo, the most moderate Democrat in the Texas delegation, is up against Jessica Cisneros, a progressive who has gained support from the likes of Sanders, Warren and U.S. Rep. Alexandria Ocasio-Cortez, D-New York.

As the Tribune’s Abby Livingston and Patrick Svitek addressed this weekend, if organized insurrections on the left and right kick these two out of office, there will be reverberations throughout the state, particularly because Granger and Cuellar hold posts on the powerful House Appropriations Committee.

In Granger’s case, her race is also important to the GOP’s push for diversity. If Granger loses, Texas’ Republican congressional delegation could be all male.

Which Democratic U.S. Senate candidates will swing and miss with voters?

There’s likely to be a runoff election in the Democratic primary for U.S. Senate. But with 12 candidates, that still means 10 will fall Tuesday.

MJ Hegar led the crowded field in a February University of Texas/Texas Tribune Poll, but she only garnered 22% support — not enough to eke out the majority needed to avoid a runoff for a spot on the November ballot against U.S. Sen. John Cornyn.

The party has failed to rally around a single candidate, especially after the Democratic Senatorial Campaign Committee’s endorsement of Hegar seemed to have little impact on voters’ perception of the race. (Hegar has led the field in fundraising.)

But assuming Hegar is a shoo-in for the runoff, the race for the second spot appears wide open.

At least one of her rivals — state Sen. Royce West of Dallas — has been on the airwaves, launching a last-minute cable ad buy in Dallas. Another contender, Cristina Tzintzún Ramirez, has a political action committee, Lone Star Forward, that’s been going on TV for her. (Hegar has been on TV, too.)

To maintain her lead, Hegar announced a get-out-the-vote initiative this weekend targeting Houston, Dallas and San Antonio. Her opponents, meanwhile, have attempted to posit themselves as more progressive (Tzintzún Ramirez) or more experienced (West) alternatives who deserve to be the one on the ballot against Cornyn.

At least one-third of voters in an NBC/Marist poll released last week were still undecided, while a whopping six candidates — Tzintzún Ramirez, West, Annie Garcia, Sema Hernandez, Chris Bell and Amanda Edwards — were within the margin of error to make it into a runoff against Hegar.

In a volatile race with many unknown faces, the only safe bet is on unpredictability.