Did you notice something missing from Bloomberg's ads? 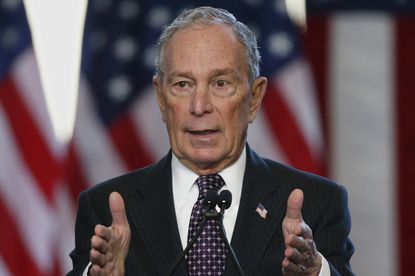 No matter where you live in the country, there’s an excellent chance that you feel like you’ve spent the past few weeks or months being blasted with ads for Mike Bloomberg’s presidential campaign. You’re probably hearing, “I’m Mike Bloomberg, and I approved this message,” in your dreams . . . or perhaps your nightmares. There are probably some toddlers who will make that phrase their first words.

But you know what word doesn’t appear in Bloomberg’s ads? “Democrat.”

This may just indicate that Bloomberg knows there’s no point in touting himself as a Democrat; he only joined the party in 2018, and donated to Republicans as recently as that year. Bloomberg’s campaign may feel he has the best chances of picking up votes among independents and Democrats with minimal party loyalty.

Or . . . if Bernie Sanders wins the Democratic nomination . . . does Bloomberg take his pre-established, more-than-a-half-billion-dollar campaign and run as an independent? We know Bloomberg and Sanders vehemently oppose each other, and see each other as only a marginal improvement upon Trump, if an improvement at all.

If Bloomberg did decide to run as an independent, he wouldn’t have to change a single thing in his current ads.