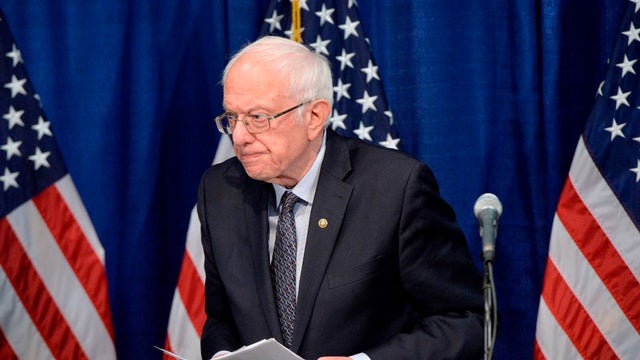 Senate Democrats were far from thrilled to hear Sen. Bernie Sanders (I-Vt.) say Wednesday he would keep fighting for the presidential nomination, with some colleagues starting to drop hints he should consider ending his White House bid sooner rather than later.

Sanders was trounced Tuesday in Michigan, a state he won in 2016 and one that his supporters considered crucial to mounting a comeback against former Vice President Joe Biden. It now appears Sanders will need a political miracle to overcome his rival in the delegate race.

Senate Democrats, many of whom are not fans of the self-described democratic socialist’s signature proposals, such as “Medicare for All” and tuition-free college, are now suggesting Sanders should be thinking about wrapping up his campaign and help unify the party in its opposition to President Trump.

But they are treading very carefully, fearing a repeat of 2016, when many Sanders supporters skipped the general election because they felt the party tipped the scales unfairly against their candidate.

“I’m sure Bernie will do the right thing. And I know how hard this is, but I think it’s pretty much decided now,” said Sen. Dianne Feinstein (D-Calif.), who supports Biden.

Several Democratic senators privately voiced concerns earlier this year that the primary could drag on for months, consuming party resources while Trump focused on preparing for November. The president spent nearly $20 million on Facebook ads in 2019, significantly more than any Democratic candidates.

Sen. Jon Tester (D-Mont.) said it would be “wise” if Democrats start gearing up for the general election.

Tester said it’s up to Sanders to decide when to end his campaign, but urged him not to prolong the race unnecessarily.

Biden is now well ahead in the race for delegates, with 864 to Sanders’s 710.

A candidate needs 1,9991 pledged delegates to win the nomination on the first ballot at the party convention in July, something that Biden is well positioned to do if he maintains his trajectory.

Michigan, which Biden carried with 53 percent of the vote, was an especially tough loss for Sanders, who thought he’d be able to win by hammering Biden’s record on free trade.

“Last night, obviously, was not a good night for our campaign from a delegate point of view,” Sanders said Wednesday during nationally televised remarks delivered from Burlington, Vt.

But he vowed to stay in the race and pointed to his Tuesday victory in North Dakota and a slight lead in Washington state, where votes are still being counted.

“We are strongly winning in two enormously important areas which will determine the future of our country. Poll after poll, including exit polls, show that a strong majority of the American people support our progressive agenda,” he said, citing support for his bold policies to expand health care and curb climate change.

He also pointed to his traction with young voters.

“We are winning the generational debate. While Joe Biden continues to do very well with older Americans, especially those people over 65, our campaign continues to win the vast majority of votes of younger people,” he said.

Sanders, addressing what he called the “Democratic establishment,” warned that the party needs to win the voters “who represent the future of our country” and held up his own popularity among younger voters as a powerful reason to stay in the race.

But turnout among younger Sanders supporters has fallen short compared with some 2016 primaries, making the uphill battle even steeper for the former front-runner.

Sanders said he’s now looking forward to the debate with Biden scheduled for Sunday in Arizona, where he plans to press the former vice president on health care, climate change and the cost of education.

Sanders’s plan is to take advantage of the two-candidate race by concentrating his fire on Biden and to argue that his moderate policy views are out of step with many Democratic voters.

That strategy isn’t sitting well with some Democratic senators who think Biden is on a clear path to winning the nomination and want the party to start coalescing behind the likely nominee.

While attacking Biden’s views on health care, climate change and student debt may help Sanders narrow the margin of his losses in future primaries, Biden’s delegate lead will be hard to overcome. Not only is Biden beating Sanders in states that Sanders won four years ago, such as Minnesota and Michigan, the former vice president is also bringing out voters in record numbers.

The former vice president won 399,439 votes in Missouri, compared with the 310,602 votes former Secretary of State Hillary Clinton collected when she edged Sanders there by 0.2 percent in 2016.

Sanders has repeatedly said he plans to support the eventual Democratic challenger to Trump and that his highest priority is to defeat the president.

Democratic lawmakers have applauded his promise to be a team player. But some are saying Sanders needs to follow his words with deeds when the time comes, and many think that time will soon be at hand.

“Bernie’s got a debate coming up and there’s time before the convention for him to make his decision,” said Sen. Sheldon Whitehouse (D-R.I.). “But I think that anybody even remotely loyal to our party has to show by their actions and not just by their words that defeating Donald Trump is their first priority.”