Culling the Texas ballots, round one 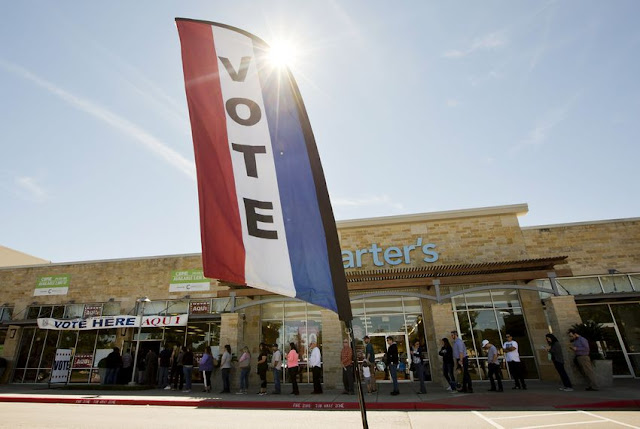 The political caravans depart for other primary election states this week, leaving the surviving Texas candidates to sort through the results and get ready for the next stage — the quieter but important runoff elections that will decide who’ll move on to the general election.

Several of the primary races have enough candidates for a whole ballot. Forget the presidential race — there are 17 people running for the U.S. Senate, including five Republicans and a dozen Democrats. John Cornyn might get out of the primary without a runoff opponent, but there will almost certainly be two Democrats left for the May runoff.

That’s only the beginning. Tuesday’s election is the end of the first round and simply the end for a lot of would-be officeholders. The end of the road. The political sorting hat. The first cut.

Texas Democrats have four or more candidates in each of seven congressional races — a total of 38 candidates. At least 24 of those people won’t have to get out of bed early Wednesday.

The congressional crowds are even bigger on the Republican side, where 13 races have four or more candidates — 103 candidates in all. That’s 77 people who get to sleep late the next morning.

That’s just a sampling, but it makes the point: Most of the people on the primary ballots are close to their 2020 exit ramps. But what gets decided Tuesday isn’t just about what happens to them; the winners will have to live with what’s left.

A good number of them will be in runoff elections. Those come at the end of the school year, the beginning of the summer. It’s hard to get voters’ attention, and organization — who can persuade the most people to come out and vote — can be more important in a low-turnout election.

Turnout is not as big a problem in the primary or, especially, in the general — not with a presidential race holding everyone’s attention. And May will determine the final outcomes in some races. The districts where U.S. Reps. Mike Conaway of Midland and Mac Thornberry of Clarendon are retiring are prohibitively Republican. Nothing is impossible, but it would take a peculiar series of events for Democrats to prevail in either: The redistricting maps were drawn to favor Republicans, and they were drawn effectively. The odds will strongly favor the winners of the GOP primaries in both places, and the number of Republicans seeking each seat almost guarantees runoffs.

You see where this is going? Voters in those two districts are making their final congressional choices, practically speaking, in May. Tomorrow, they’ll choose from 11 Republicans in Conaway’s district and from 15 in Thornberry’s. Unless someone wins more than 50% in the first round, the top two finishers will advance.

After that round, the top of the ticket will start to matter — a source of consternation for many down-ballot candidates. To put it gently, President Donald Trump’s presence at the top of the ticket could be helpful in some Republican parts of the state and not so helpful in other places. And Democrats are wringing their hands in a most public way about how Bernie Sanders or another potential nominee might affect their chances.

Republicans are playing defense in Texas this year, working to hold their numbers in the congressional delegation and their majority in the Texas House. For the opposite reasons, Democrats are playing offense, contesting seven congressional seats now held by Republican members of Congress (while defending two they took away from Republicans in 2018) and trying to add nine Democrats in the state House, which would give them a majority. At the same time, the Democrats are defending 12 seats they won in the House in 2018.

For down-ballot candidates — and all of those races come after the noisy presidential race on the ballot — the contestants at the top could decide which voters show up. Another twist while we’re at it: There will be no straight-ticket voting in Texas this year, which could change those up-ballot, down-ballot dynamics. Some voters will slog their way through, voting for the candidates (maybe the parties) of their choice. Some will probably vote in the top race and leave it at that.

Tuesday is the first step. Then the election year will get very, very interesting in Texas.