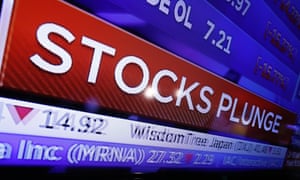 The twin threat of an expanding coronavirus outbreak and an oil price war hammered markets on Monday, raising the stakes of a global economic slowdown.

A burgeoning battle between Russia and Saudi Arabia to flood world markets with cheap oil sent shockwaves through financial markets and rattled investors already reeling from panic driven by the global spread of the coronavirus.

The climbing number of confirmed coronavirus cases in the U.S. and a lockdown imposed in northern Italy have also fueled fears that efforts to mitigate the virus’s spread could cause a global recession.

President Trump sought to downplay the threat of the coronavirus and the impact of an oil glut on the U.S. economy, dismissing the fight between petroleum exporting nations and accusing the news media for drumming up unnecessary panic.

“Saudi Arabia and Russia are arguing over the price and flow of oil. That, and the Fake News, is the reason for the market drop!”

A flood of oil could mean cheaper gasoline prices for consumers, but it could also gut a crucial force behind global economic growth. American oil producers could be hit hard, and oil industry companies could find it harder to get financing through the credit and bond markets. Overall, the drop in prices could also signal a harder slide for the global economy.

“What I’m looking at here is the market preparing for a much larger shock to the economy and uncertainty for the rebound that will follow,” said Joe Brusuelas, chief economist at audit and tax firm RSM.

Antoine Halff with Columbia University’s Center on Global Energy Policy said that he believes the drop will result in short-term job losses and could be disastrous for small companies but that large companies will probably come out stronger.

“In the longer term, what this will likely do is make U.S. production much more efficient and much more cost-competitive,” Halff said.  “There will be casualties, but the survivors will come out stronger.”

Russia declined last week to join the Organization of the Petroleum Exporting Countries nations in agreeing to cut production in response to the slowdown in demand from the coronavirus, which has shuttered factories in Asia and Europe.

In response, Saudi Arabia announced that it would ramp up its oil production, resulting in the sharp decrease in price.

Ed Hirs, an energy economist with the University of Houston said in an interview that Saudi producers will be able to profit at this lower price.

“They can profitably produce at this level and that’s going to be very, very difficult for U.S. producers to match,” Hirs said.

Halff compared the plunge to the last major oil price collapse in 2014, saying he believed this one is more dramatic.

“We’ve been through this cycle except that this time around, the cycle seems to be even more violent. The price collapse is even steeper and even faster than it was back in 2014,” he said. “The magnitude of this downturn is kind of unprecedented.”

Sarah McCrary, CEO of GasBuddy, a company that provides real-time gas prices, said that while the drop in prices may be good for consumers, it comes with increasing price volatility. She also said that the drop is unusual because it’s being caused by a change in demand linked to an outbreak of disease rather than a change in supply because of emerging technology.

“In this case, the trigger of the change in demand came from China shutting down large parts of its economy,” McCrary said. “If similar effects run through the global markets, the overall demand will be down and then we just have too much supply.”

A price war among oil exporting nations also poses new risks to the U.S. economy and financial markets thanks to the country’s sharp increase in oil exports over the past decade.

“Even though a lower oil price may benefit consumers at the pump, if folks are social distancing they might not be around to feel it,” Arone said. He added that financial trouble within the oil industry could force a credit squeeze beyond the energy sector.

“A lot of the volatility has been primarily driven by the coronavirus itself,” Arone continued.

“We're now moving on to an important transition period as to what are those downstream secondary effects in the oil market and credit markets.”

Trump has waived off the risks posed by the coronavirus outbreak and its toll on the economy, defying the warnings of public health officials in a series of tweets sprinkled throughout the market rout.

But Monday’s market meltdown is ramping up pressure on policymakers to pump fiscal stimulus into the U.S. economy as it faces increasingly dire threats. The Federal Reserve Bank of New York announced Monday it would boost its daily offering of short-term loans to banks by $50 billion to keep financial markets flowing through a volatile stretch.

Trump was expected to meet with his top economic officials Monday to consider a package of potential stimulus options, including tax deferrals, paid sick leave and grants to businesses, according to reports.

And a spokesman for Senate Finance Committee Chairman Chuck Grassley (R-Iowa) said Monday the senator is “exploring the possibility of targeted tax relief measures that could provide a timely and effective response to the coronavirus.”

Economists stress that while looser financial conditions could help keep markets stable, fiscal stimulus enacted by the president and passed by Congress is essential to fending off job losses and contraction.

“If policymakers move quick enough, we can avoid a full-blown recession. If the reaction function of the fiscal authorities remains the same, then it's beginning to get more difficult to argue that you won't have a sharp, albeit somewhat short downturn,” Brusuelas said.