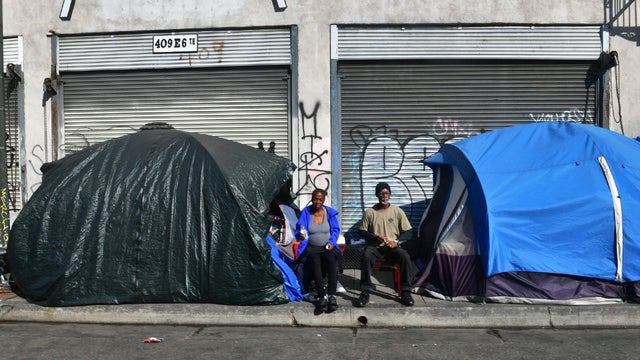 People who are homeless face a huge risk of exposure to the coronavirus sweeping the nation, and city officials worry that their homeless populations could become vectors from which the virus spreads even more broadly than it has already.

The number of people experiencing homelessness across the country has grown in recent years after falling in the wake of the recession, as housing stocks diminish and prices rise. In many cities like Seattle, San Francisco, Los Angeles and Washington, entire homeless camps have sprouted.

“Since before we knew we had a case, it was on our shortlist of concerns,” said Seattle Mayor Jenny Durkan. “It remains a very big concern for the city of Seattle, both from a public health standpoint as well as just the ability to deliver basic services.”

About 568,000 Americans are experiencing homelessness, according to the Department of Housing and Urban Development, which conducts an annual point-in-time census. California has the nation's largest homeless population, at more than 150,000, while 92,000 people in New York do not have a home. More than 20,000 people are homeless in Texas, Florida and Washington, the HUD report found.

Those who live on the streets or in shelters are uniquely at risk of catching any disease, and especially one as virulent as the coronavirus, said Maria Foscarinis, founder and executive director of the National Law Center on Homelessness and Poverty. And if they do catch an infectious disease, they are likely to spread it more widely than someone who can distance themselves more easily from the rest of society.

“People who are homeless tend to have more health problems because of their homelessness. They are more exposed, so they are at higher risk,” Foscarinis said in an interview. “They are unable to self-quarantine. If you don't have a home, you can't stay in it. Therefore, the risk of contracting the disease increases, and people can also be transmitters of the disease.”

In recent years, the cramped quarters and unsanitary conditions in some homeless encampments have led to the spread of diseases that are unheard of in other parts of the country, like typhus and tuberculosis.

Now, as the coronavirus has spread, cities and states are beginning to take new measures to protect those without homes. California Gov. Gavin Newsom (D) said Monday the state had blocked off nearly 400 rooms in two Oakland hotels to clear homeless encampments. Newsom also said Monday that a homeless person in Santa Clara County had died of the virus.

Newsom, who dedicated his entire state of the state address to California's growing homelessness crisis last month, has also deployed camp trailers and modular tents to help get some homeless people into something approaching a stable place to live.

“The best and most effective thing to do is to find places for people to live, creating housing. There are some shorter, faster ways to do that,” Foscarinis said.

Cities like Miami, Baltimore, New Orleans and Nashville have suspended evictions during the outbreak to ensure more families do not become homeless. Seattle and other cities have also suspended turning off utilities for those who fall behind on their bills.

“The last thing we want is for people to be displaced from their homes or to suddenly have their power and lights shut off,” Durkan said.

Groups that serve the homeless say they are taking extra precautions to prevent the virus from sweeping through dormitory-style shelters. At Central Union Mission, the oldest social services organization in Washington, D.C., residents of their men's shelter have their temperatures checked as they walk in the front door. If their temperature is too high, they are sent to a medical facility for treatment.

“There's no such thing as isolating someone in a homeless shelter. Once it gets in it can spread very rapidly,” said Joseph Mettimano, Central Union Mission's president. “We're still fully open for business. We're still sheltering the homeless and feeding the hungry. But we are taking all reasonable steps to keep it out of the building.”

As Americans rush to grocery stores to stock up on supplies, shelves are going empty beyond the stores themselves. Shelters like Central Union Mission rely on donations from grocery stores to feed those in their care.

“We need to continue to be able to feed and shelter folks here. We have a pretty big dependence on donated food from grocery stores and Costco, and we've already seen a decrease in those donations,” Mettimano said.