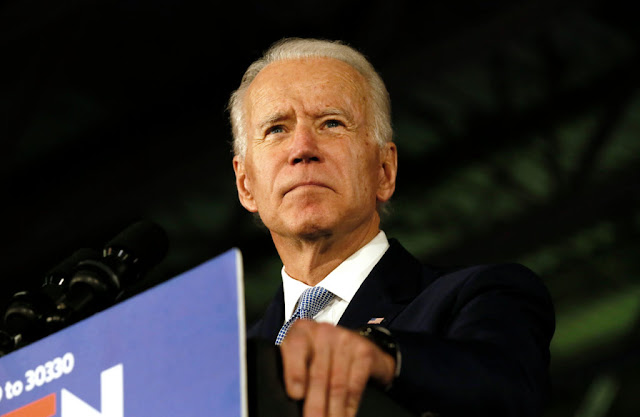 Former Vice President Joe Biden’s momentum after a big victory in South Carolina surged higher on Monday as Sen. Amy Klobuchar (D-Minn.) dropped out of the race and endorsed him for president.

Klobuchar became the second centrist rival to Biden in less than 24 hours to end their campaign and endorse Biden after the South Carolina results.

Former South Bend, Ind., Mayor Pete Buttigieg suspended his campaign after a disappointing showing in South Carolina. Buttigieg is also endorsing Biden, according to a source close to Biden’s campaign.

All of this was stupendous news for Biden, whose campaign was all but left for dead after he performed poorly in Iowa and New Hampshire. He’s now emerging as the clear rival to Sen. Bernie Sanders (I-Vt.) for the Democratic nomination.

The big question looming over his campaign on Monday was whether the burst of momentum would be enough to carry him to a solid result on Super Tuesday.

Biden enters the biggest primary day at a disadvantage to Sanders.

For starters, the progressive senator from Vermont has outspent him across the Super Tuesday states. The former vice president’s campaign is also out-staffed from coast to coast.

“That will definitely cost us,” one longtime ally acknowledged. “But hopefully not too much.”

South Carolina did lead to a surge in fundraising for Biden, and the Super Tuesday map includes states in the South where Biden could look for a repeat of his South Carolina win, which was propelled by African American voters.

Strategists say they don’t think the win in South Carolina was too late for Biden, but they acknowledge that’s his worst-case scenario.

“The worst-case scenario is that the good South Carolina results happened ‘too late’ to fully capitalize on heading into Super Tuesday,” said Democratic strategist Eddie Vale.

Going into Tuesday, Sanders has 60 delegates to 54 for Biden, according to a count kept by the political website RealClearPolitics. Yet California will be handing out 415 pledged delegates alone, and Sanders seems poised for a big victory in the Golden State.

Biden advisers and allies say their main objective on Tuesday is to keep the race as close as they can. That means they have to perform above the 15 percent threshold in states like California and Texas. Candidates who do not win 15 percent of the total state vote or 15 percent support in congressional districts in the state won’t win any delegates.

“If we’re able to keep it close in California and Texas, and we can beat Sanders across the South, we live to see another week,” said one longtime adviser. “The goal is to remain neck-and-neck with him throughout and then hopefully we gain support as the field winnows and as the endorsements come in. That’s our pathway to victory.”

Julian Zelizer, a professor of public affairs and history at Princeton University, said if it is a complete rout for Sanders in California and Texas, it “doesn’t give Sanders a path to the majority of delegates but it would undercut the Biden boost.”

He added that an overwhelming win by Sanders “creates more momentum” for other candidates as alternatives to Sanders.

The number of “other candidates” is quickly shrinking, however.

The main other candidate to Sanders and Biden is now former New York City Mayor Mike Bloomberg, who has been spending millions on television ads. The Super Tuesday contests are the first ones that Bloomberg is contesting, and he could play spoiler for Biden.

After Biden performed poorly in Iowa and New Hampshire last month, Bloomberg appeared to surge in the polls and received a number of endorsements. Since then, he’s had one disastrous and a second weak performance on the debate stage, raising questions about whether any momentum he once had has been lost.

One “worse-case scenario for Biden is Bloomberg siphoning away support from him especially in places like North Carolina, Virginia and California,” said Democratic strategist Joel Payne. “If Biden has a chance to unite the center-left of the party, it has to start this week with Super Tuesday.”

If Biden does better than Bloomberg on Tuesday, a result that now seems entirely possible, there may be pressure on Bloomberg to end his campaign. Biden won a slew of new endorsements on Monday, a clear sign the party establishment is trying to boost him. The most significant endorsement may have been from former Sen. Harry Reid (Nev.), the former Senate Democratic leader and a stalwart party leader.

Biden also “got a real shot in the arm” with Klobuchar and Buttigieg suspending their campaigns and pledging their support, said one major Democratic donor.

“The moderates seem to be coalescing around him and that bodes really well for him,” the donor said, adding that the money will come with the support. “He’s had his best week of the campaign which can lead to the best month of his campaign."

“But more importantly he’s gotten a huge wave of earned media that can really bump up his coverage,” he said.

“Jim Clyburn, Pete Buttigieg and Amy Klobuchar alone just made Biden the establishment 'safe' choice for president so, first, he has a lot of flowers to send out,” strategist Christy Setzer quipped. “But if the former vice president actually wants to live at 1600 Pennsylvania one day, he also needs to show he's viable and can win without someone else putting him over the top.”