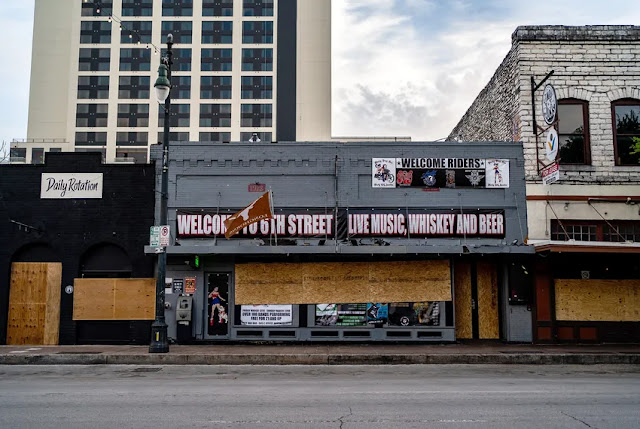 “Your money or your life!” has never seemed so stark.

But as an increasing number of local leaders tell us to lock things down in preparation for the coming storm, there are others — the top guy, in fact, along with choristers like Texas Lt. Gov. Dan Patrick — trying to tell us this will only last a minute, and that it’s time to get the economy back on track.

The money’s not going to matter if we don’t listen to the doctors. You can’t take it with you. And the worst of the new coronavirus has not yet been visited upon us. Most of us who will get sick haven’t been infected. Neither have most of us who will die.

The smart people, like the weather forecasters in front of a terrible hurricane, are trying to tell us to lock things down, to seek high ground, to figure out how to protect the people most dear to us.

It seems inconvenient, and it is. It’s boring to sit at home, even though you really love those people. It’s hard not to worry about money.

Soon enough, though, it will be clear what the doctors are talking about. Soon enough, there will be lots of time to wonder what we might have done to get ready. But the necessary information is available right now: The threat to our health is the most important thing facing us. The threat to the economy is both hugely important and secondary.

The tension between those two crises — health and economics — is telling us a lot about our leaders, for better and for worse. Congress locked up for days over the politics of what to do. The president and other executives fretted like Amity Mayor Larry Vaughn — the fictional politician in the movie Jaws — over whether the existential threat to his community might hurt business.

Gov. Greg Abbott, Lt. Gov. Patrick and other Texas leaders have gone back and forth on restricting local businesses, but their arguments with local leaders have generally been easier than the current quandary.

When cities around Texas started passing laws requiring local businesses to pay employees on sick leave, instead of forcing employees to decide whether to work sick or stay home without pay, state officials raised hell and said the locals were overstepping their authority.

When the city of Austin, among others, moved to put rideshare companies under the same regulations that govern taxis, the companies went to state leaders for help, and got it.

Last year, state leaders moved to restrict local governments’ ability to increase property taxes, which will now require approval from voters when they rise more than a set amount. Though the governor mentioned limits on state-mandated spending in his State of the State speech, neither he nor the Legislature moved to cap state requirements on local spending.

Those items were popular with businesses and/or taxpayers. For state leaders, the politics was  straightforward, easy.

But as the current pandemic has risen from a spec on the horizon to an all-encompassing medical and economic disaster, top officials have been relatively slow to interfere with local responses, leaving it to mayors and county judges to tell people to stay at home and — with the exception of the governor’s order to close bars and restaurants and other businesses built around social gathering — to shut down commerce.

It’s a hard choice this time, as illustrated by the president’s vacillation between putting economics or health first. Patrick’s Monday night interview with Fox News put a harsher edge on it.

“No one reached out to me and said, ‘As a senior citizen, are you willing to take a chance on your survival in exchange for keeping the America that all America loves for your children and grandchildren?’ And if that's the exchange, I’m all in,” Patrick said. “And that doesn't make me noble or brave or anything like that.

“I just think there are lots of grandparents out there in this country like me ... that what we all care about and what we all love more than anything are those children,” he added. “And I want to, you know, live smart and see through this, but I don’t want to see the whole country to be sacrificed, and that’s what I see.”

Hug your kids. Watch over your elders. Stay calm. Get ready. We’ll figure out the economics; we always have. But we still haven’t figured out how to bring back the people we might have saved. First things first.