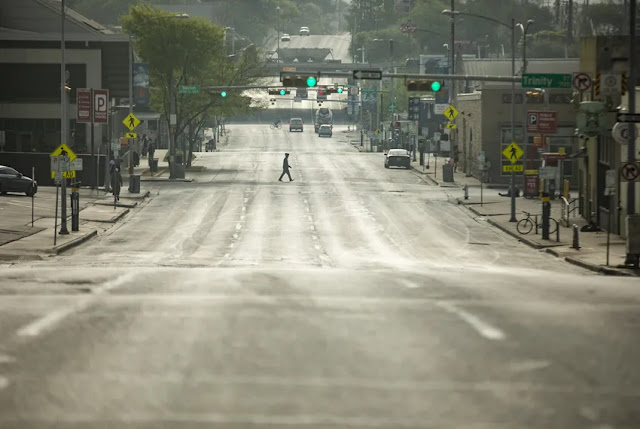 Only three COVID-19 cases have been confirmed in the 22 counties in state Rep. Drew Springer’s North Texas House district, and he said Thursday that a lot of people “are just coming to the realization about why we need social distancing.”

“There were more people on the road in Gainesville and Muenster yesterday than in New York City,” he said.

“My constituents would have argued [earlier] that we’re drastically overreacting,” Springer said. “I think as they have started hearing more, they’re coming around. ... I’m waiting to see whether the cases here, and the names of people who get sick, will change people’s opinions.”

Pandemic is a word for a disease that is no longer local, that has taken on worldwide scope.

But the responses to the new coronavirus pandemic in Texas and elsewhere are distinctly local and vary deeply — from the mostly voluntary shelter-in-place orders in effect in the state’s most populated cities and counties to the wait-and-see positions of governments and businesses elsewhere.

Those local differences help explain why statewide officials like Gov. Greg Abbott have been so reluctant to issue statewide stay-at-home orders. Metropolitan areas are aggressively putting social distancing rules in place, while less populated parts of Texas are more reticent.

Reports of COVID-19 cases might not be as prevalent outside of the metropolitan areas, and official actions have been slower and less restrictive.

In Midland, many residents have continued their normal routines, shopping in grocery stores and at busy retail locations. The city hasn’t issued restrictive orders but has been talking about it. There’s a striking parallel between the places restricting social gathering and the political map, but that’s not what some politicians see.

“I don’t know if it’s a red versus blue thing; it’s a human nature thing,” said Jack Ladd Jr., a member of the Midland City Council. “A lot of people want to see something like this before they react.”

That visibility is increasing as cases pop up in Midland. And the county recorded its first death attributed to COVID-19, the disease caused by the new coronavirus, this week, which has prompted more discussion from public leaders.

At the same time Abbott was issuing his first set of emergency orders, Anderson County in East Texas was doing the same, barring gatherings of 10 people or more and asking people to limit their interactions.

County Judge Robert Johnston said the reaction “has been pretty positive overall.” He said some churches have pushed back, noting many of them don’t have the kind of internet access that would allow online services to replace in-person congregation.

The order has limited gatherings but hasn’t kept people inside, Johnston said. “No, I don’t think they’re staying at home. They are eating at home, still running errands, but there are fewer people out.”

So far, the county hasn’t reported any confirmed cases of COVID-19, either from its general population or from any of its five state prisons.

The county has no plans to impose a shelter-in-place order, he said, but suggested it might not be necessary. “People know if we’re going to get a hand on this, we’re going to have to stay home.”

Lubbock stopped short of telling residents to stay at home, but it did put restrictions in place. Lubbock’s emergency order, Mayor Dan Pope said, “is like the stay-at-home orders elsewhere, without the panic in it.”

“You know West Texas,” he said. “We have a little more common sense ... and a healthy sense of skepticism.

“I would say people are in two camps — those who have bought in and understand and are really staying home, and another group that’s harder to reach,” he said.

He said Lubbock’s two hospitals are well situated at the moment — they can open another 40 ICU beds if needed — and added that “we don’t have any stress on our health care system” at this time. As of Thursday, the city had a drive-through testing center, and he said it plans to have a total of four by Monday. Lubbock County had 19 confirmed cases of COVID-19 on Thursday, he said.

Springer’s House District 68, which stretches from north of Dallas-Fort Worth across North Texas and into the Panhandle, is seeing a new kind of visitor he attributes to the pandemic: shoppers.

“The odd stuff here is really the foot traffic,” he said.

One meat market sold out in a matter of hours this week. “Some of the stores are limiting sales,” he said, to allow locals a chance to buy groceries and supplies before out-of-towners scoop them up.

He said the county clerks in Cooke and Montague counties have seen a rush of lovebirds from the D-FW area, where the courthouses are closed, seeking marriage certificates. “The clerk has to actually see both people to issue a license,” he said. “Some of them don’t want to wait.”