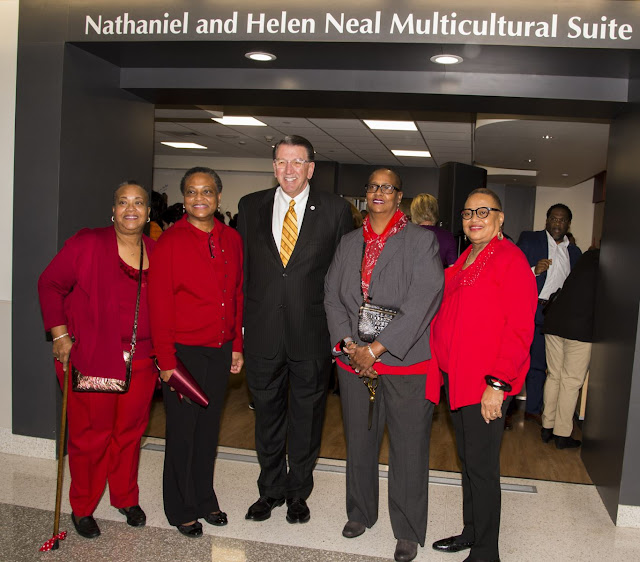 An increasingly important and contributing factor to a thriving college campus, diversity is taking shape in a new way at West Texas A&M University. The Nathaniel and Helen Neal Multicultural Suite was dedicated in the Jack B. Kelley Student Center on Feb. 3.

Located centrally on campus, the Suite houses student groups and divisions that share a foundational value of diversity and inclusion. These areas currently include the Office for Diversity and Inclusion, Office of Experiential Learning and Campus to Community, First Year Experience and the International Student Office. With ample seating and tables to facilitate collaboration, students are encouraged to use the space for meetings, group activities, tutoring, movies or just hanging out.

The Neal Multicultural Suite was named after a family of pioneers at WT beginning in the early 1960s. Nathaniel and Helen met in the 1940s while studying education at the only historical black college in Oklahoma, Langston College. They married in 1947, and after he graduated, the Neals and their four daughters - Gloria, Gwendolyn, Donna and Delores - moved to Missouri and then back to Oklahoma for teaching opportunities. Helen wanted to continue her college education while Nathaniel taught but was unable due to segregation and the limited number of all-black colleges at the time. Upon arrival to Amarillo in 1961, Helen was able to enroll at West Texas State College.

After a nearly 20-year break from school, Helen earned her bachelor’s degree in 1962 as the first African American graduate from WT. The ripples of her achievement would undoubtedly be historic and powerful in the eyes of the community and her family. Helen said she felt welcomed on campus but maintained the self-determination to “prove herself” as a trailblazer. That same year, Marvel White became the University’s first African American graduate to earn a master’s degree.

Not long after Helen’s graduation, Nathaniel became the first African American professor at WT in 1971. He taught education and was a trainer who helped new teachers focus on identifying with minorities, which could be considered the beginnings of diversity and inclusion at WT. In addition to the raising of their own family in the Texas Panhandle, the Neals embraced changing times in society. They did this on campus by elevating students they identified with like White and Betty J. Thomas, also an African American who transferred from Amarillo College in 1960, and students from other groups.

Since Helen’s time, many initiatives have been established to not only include but to seek diversity on-campus including the appointment of the University’s first chief officer for diversity and inclusion, Dr. Rosemary Gray in 2013. Currently, Angela Allen serves in that capacity and has since 2015. In this role, Allen has facilitated many campus-wide trainings that share information about developing demographics, such as generation Z, and how to have tactful discussions with diverse groups.

The Neal Multicultural Suite is a continuation of the growing attention to a diverse student body, and though it most obviously serves as a space for students to work, it also serves as a historic marker of the Neal family legacy that set diversity and inclusion in motion at WT nearly 60 years ago.

For more information about the Suite or diversity on campus, contact the Office for Diversity and Inclusion at 806-651-8482.