Winners and losers from the Iowa caucuses 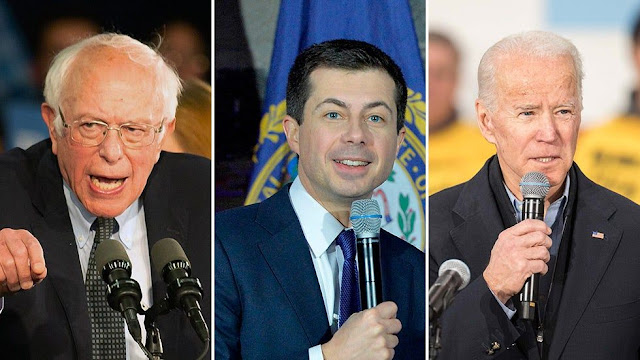 The Iowa Democratic Party sought on Tuesday to begin clearing up the debacle that enveloped its caucuses the previous night.

Late on Tuesday afternoon, the party finally released partial results. The returns covered 62 percent of the precincts in the state and much could yet change, especially at the top of the field where less than 2 points separates front-runners Pete Buttigieg and Sen. Bernie Sanders (I-Vt.).

Still, Tuesday’s partial results are vital in shaping perceptions with the second contest, the New Hampshire primary, just one week away — and no timeline was given for the release of the full results in Iowa.

Based on the current state of play, who are the winners and losers from the Hawkeye State?

Iowa often delivers a surprise and this year Buttigieg provided it.

Sanders, who has 25.1 percent, could yet overtake Buttigieg, of course. But the mere fact that the 38-year-old former mayor is leading is startling enough. He had little national profile at the start of his campaign and was considered a long shot against more high-profile names.

Before the caucuses took place, there had been skepticism about whether the large, predominantly young crowds that Buttigieg was drawing to his events would actually show up to caucus.

Irrespective of whether Buttigieg holds on for the win in Iowa or ends up second, he also benefits from former Vice President Joe Biden’s poor showing.

Biden’s problems mean Buttigieg could be on his way to becoming the main centrist alternative to Sanders.

That has always been his one path to becoming a serious contender for the nomination.

Sanders won the most votes in Iowa based on the early returns — a point his senior adviser Jeff Weaver emphasized immediately in a statement. And Sanders could yet win the caucuses outright.

More to the point, he was the clear choice of Iowa’s progressives, with Sen. Elizabeth Warren (D-Mass.) some distance behind in third.

Whatever the final outcome in Iowa, Sanders has proved he can translate grassroots enthusiasm into actual votes, withstanding the charge from other camps that he is too extreme in his policy positions.

The Vermont senator also enjoys a commanding polling lead in New Hampshire. In the RealClearPolitics polling average on Tuesday, he was polling at about twice Buttigieg’s level.

Even if Buttigieg gets a boost from his Iowa surprise, there could be a silver lining for Sanders in New Hampshire.

If Buttigieg and Biden split the centrist vote and the left continues to coalesce behind the Vermont senator, Sanders will be in a formidable position.

Either way, Sanders goes into New Hampshire with a strong wind at his back.

The problems with the Democratic caucuses gave the president a chance to gloat — and he was not going to pass up the opportunity.

“The Democrat Caucus is an unmitigated disaster,” the president tweeted early on Tuesday morning. “Nothing works, just like they ran the Country.”

Trump himself won the Republican caucuses easily, facing only token opposition. He was set to deliver his State of the Union address, amid all the usual pomp and circumstance, on Tuesday evening. His acquittal in his Senate impeachment trial a day later is a foregone conclusion.

The president had made a significant effort to make sure Democrats would not have the spotlight to themselves in Iowa. He held a rally in Des Moines last Thursday, and a number of high-profile surrogates fanned out to caucus locations on Monday.

But the Democrats handed Trump a public relations gift with the results debacle.

The Granite State has always had a fraught relationship, politically speaking, with Iowa.

The two states are rivalrous: New Hampshire politicos note, correctly, that they host the first-in-the-nation primary and look askance at Iowa’s caucus process.

Their Iowan equivalents defend the idiosyncrasies of the caucuses and note how their state has sometimes shifted big races at a stroke — the most famous recent example being then-Sen. Barack Obama’s (D-Ill.) 2008 victory here.

Iowa’s problems this year, though, seriously endanger the future of the caucuses. No tears will be shed in Concord or Manchester.

Warren lives to fight another day.

A third-place finish was not what she would have hoped for at one stage in the process — she led polls in Iowa for much of the fall.

Still, a top three finish — assuming it holds in the final outcome — is creditable enough. Warren has enough support and resources to fight on at least through Super Tuesday in early March.

Of late, she has been seeking to position herself as the unity candidate, acceptable both to the progressives who back Sanders and the centrists who favor Biden and Buttigieg.

That path is still open to her, but she needs to make sure she is not blown out by Sanders in New Hampshire.

Klobuchar appears to have got exactly what the polls had predicted: a fifth-place finish.

Such an outcome does no harm to Klobuchar’s reputation. She has already outlasted candidates who once rode higher expectations, including Sens. Kamala Harris (D-Calif.) and Cory Booker (D-N.J.). She was well-received in Iowa, especially during the final stretch before the caucuses.

Still, it’s near-impossible to see how the Iowa result can catapult Klobuchar forward in any significant way.

This was a disastrous cycle for Iowans hoping to protect their first-in-the-nation status — and it came at a time when the caucuses were already embattled.

The delay in reporting the results is a huge embarrassment.

But it also came on top of another red-faced moment, when the final Des Moines Register poll — long held up as the gold standard in the state — was canceled at the last minute. Buttigieg’s name was apparently omitted in at least one call for the poll, calling the integrity of the whole survey into question.

A chorus of dissatisfaction with the caucuses had already been growing louder in Democratic circles. The critics note that the state’s demographic makeup — its population is 90 percent white and just 4 percent black — makes it ill-suited to play such an important role in a party that prizes diversity.

It seems a real possibility that 2020 will mark the last hurrah for the caucuses.

It was a very, very poor night for Biden.

In the initial returns, he was fourth in the delegate count, and only 3 points ahead of Klobuchar.

It’s far from clear how a candidate who finishes fourth can make the argument that he is the most electable person in the field — especially given that Biden is not expected to win in New Hampshire either.

Biden’s events in Iowa were underwhelming at best — small crowds, very few young people and a distinct lack of energy.

The worry is that those factors bespeak a wider lack of enthusiasm about the former vice president.

Biden backers point to his strong African American support as a key strength and say that South Carolina — the fourth state to vote and one in which black Democrats typically cast more than half the ballots — could act as a firewall for him.

But it is easily conceivable that Biden could go into South Carolina having lost Iowa, New Hampshire and Nevada. Whether a firewall can hold up in such circumstances is highly questionable.

The delay in reporting the results from the caucuses launched a plethora of conspiracy theories on Twitter and elsewhere. Sanders supporters, in particular, are deeply suspicious of the party apparatus. What happened here only deepens that enmity.

More to the point, the party blew one of its biggest set-pieces. Rather than having a winner making their case against Trump in prime time, the process is mired in recrimination and confusion.

Democrats can right the ship soon enough in New Hampshire. But Iowa was a grim experience for the party.