US to evacuate Americans from cruise ship 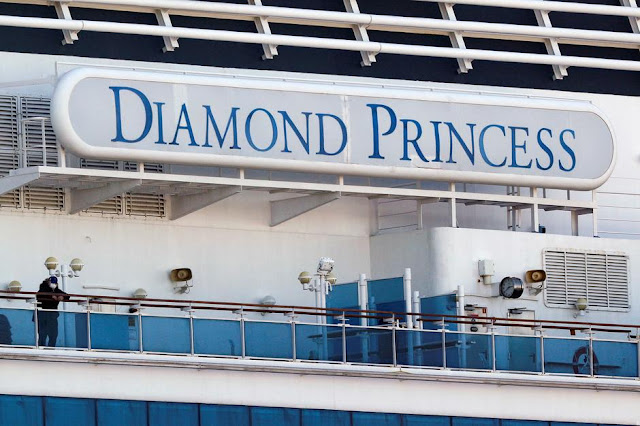 The U.S. will send a chartered flight to Japan this weekend to evacuate Americans quarantined on a cruise ship due to coronavirus cases on board, the U.S. Embassy in Tokyo announced Saturday.

More than 400 U.S. citizens have been among those quarantined on the Diamond Princess cruise ship in Japan since Feb. 5. The ship, which has more than 3,000 passengers, had the densest concentration of confirmed coronavirus cases outside of China at 218.

Though the ship was in quarantine for nearly two weeks to prevent the spread of the disease to mainland Japan, passengers on board feared it could put more of them at risk.

“We recognize this has been a stressful experience, and we remain dedicated to providing all the support we can and seeing you safely and expeditiously reunited with family and friends in the United States,” read a letter from the U.S. Embassy in Tokyo.

The embassy said that a chartered plane would arrive in Japan on Sunday night, with passengers bused from the ship to the aircraft. Passengers will be screened for symptoms and will try to get treatment in Japan if necessary, the letter said. The chartered plane will then head to Travis Air Force Base in California before continuing on to Lackland Air Force Base in Texas, where passengers will undergo an additional two weeks of quarantine.

The passengers returning from the ship will be held in separate facilities from those already in quarantine from evacuation flights from Wuhan, China, according to the Centers for Disease Control and Prevention.

"We understand this is frustrating and an adjustment, but these measures are consistent with the careful policies we have instituted to limit the potential spread of the disease," the U.S. Embassy said.

The letter warned that Americans who opted not to fly back on the plane would be unable to return to the U.S. for “a period of time.”

“From firsthand accounts, we are concerned about the existing level of care available on the ship, particularly to the 428 U.S. citizens aboard, as well as the national security concerns posed by reported quarantine conditions,” the letter said.

“While we understand this is a fluid situation because of the fast-moving nature of the outbreak, we are writing to strongly encourage you to test asymptomatic U.S. citizens as soon as possible and evacuate and quarantine those who test negative for the coronavirus in a U.S.-based facility,” it added.

The news comes after a group of House lawmakers called on the Trump administration to evacuate the American passengers in a letter earlier this week.