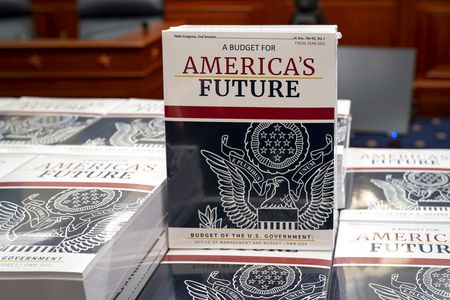 The new budget for the 2021 fiscal year beginning in October includes $590 billion in non-defense spending and $740.5 billion in defense spending. The total $4.8 trillion figure also anticipates about $3.5 trillion in spending on Social Security, Medicare and other entitlements.

The August deal hammered out by Trump in talks with the House and Senate raised spending for both defense and domestic spending.

Under the new budget, the defense figure is the same, but the domestic spending is cut through changes to a slew of federal programs and agencies.

Presidential budgets are annually ignored by Congress, so the two-year deal negotiated last fall is likely to remain in place.

"Everyone knows the latest Trump budget is dead on arrival in Congress. It’s merely a political stunt to gratify extremists in his party," said Sen. Sheldon Whitehouse (D-R.I.), who is pushing for to reform the budget process alongside retiring Senate Budget Committee Chairman Mike Enzi (R-Wyo.).

But the new budget shows where the president's priorities are, both for this year and a second term if Trump wins reelection, and some of the proposals could turn into budgetary battles later this year.

Though the budget forecasts a $1 trillion deficit for 2020 and a $966 billion deficit in 2021, it lays out a plan for eliminating the deficit over 15 years, a longer time frame than the typical decade-long budget window.

To do so, Trump would cut domestic spending while reducing costs to Medicaid and Medicare.

The administration would seek to reduce costs by capping or block granting Medicare benefits, adding work requirements to a slew of medical and anti-poverty programs or implementing changes that might otherwise lower the costs of Medicare and Medicaid.

Democrats pounced on the $700 billion cut to Medicaid and limitations on other health and welfare programs, which the administration said resulted from savings and efficiencies.

“Year after year, President Trump’s budgets have sought to inflict devastating cuts to critical lifelines that millions of Americans rely on," House Speaker Nancy Pelosi (D-Calif.) said in a statement.

The path to clearing deficits also assumes that interest rates on the debt will drop again before climbing back up and that the economy will grow an average of 3.1 percent each year over the next decade, a growth level oft-promised but never achieved by Trump and his administration.

The proposal does include a couple of areas where there could be cooperation between the administration and Democrats in Congress.

The White House left an empty placeholder for a prescription drug plan, indicating an openness to negotiating a bipartisan deal with Democrats.

But officials were less optimistic about the likelihood of moving forward on a $1 trillion infrastructure plan, noting that Democrats would likely insist in raising taxes to cover the costs.