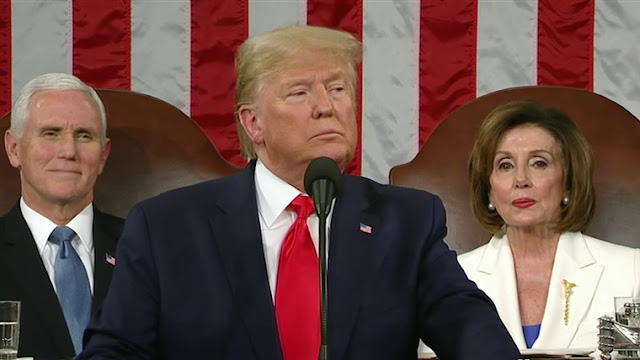 President Trump offered a preview of his reelection campaign during a State of the Union address Tuesday delivered to a House that impeached him and a Senate that is poised to acquit him Wednesday.

Trump did not explicitly mention impeachment during his remarks, a relief for Republican allies who encouraged him to focus on his agenda and policies.

Instead, the president touted what he sees as his accomplishments in moving the economy forward, securing the U.S. border, and protecting the United States from Iran and other foreign enemies, issues that are expected to drive his campaign in the fall.

“In just three short years, we have shattered the mentality of American decline and we have rejected the downsizing of America’s destiny,” Trump said in prepared remarks. “We are moving forward at a pace that was unimaginable just a short time ago, and we are never ever going back.”

Trump sought to strike an optimistic tone despite a time of considerable political divide in Washington and beyond, arguing his economic agenda in particular fostered a climate in which “every citizen can join in America’s unparalleled success, and where every community can take part in America’s extraordinary rise.”

Still, the tensions were apparent from the outset, as Trump appeared to ignore a handshake from Speaker Nancy Pelosi (D-Calif.) before beginning his speech. Pelosi largely seemed to avoid looking at Trump throughout the address, instead reading from his prepared remarks and scanning the room.

She and other Democrats stood and applauded only periodically, even as Republicans regularly gave ovations. Pelosi could be seen subtly nodding her head “no” when Trump pledged to protect Medicare and Social Security.

At the conclusion of Trump's speech, Pelosi reached for her copy of his prepared remarks and ripped it up, placing it in a stack on the dais as Republicans stood and applauded.

The president’s address covered a broad array of policy items he urged Congress to act on, including lowering the cost of prescription drugs, eliminating surprise medical billing and expanding school choice.

The speech in many ways served as a victory lap for Trump, who is seeking to make the case for his reelection as the 2020 campaign enters a pivotal phase.

Trump used the address to promote his administration’s recent actions, including the “phase one” trade agreement with China, the newly signed United States-Mexico-Canada Agreement (USMCA) and paid leave for federal workers, as well as to set the tone for his agenda in an election year.

There were a few moments of bipartisan agreement, such as when Trump called for infrastructure investments and touted the USMCA, which was achieved with cooperation from House Democrats.

But he often sought to contrast his own vision for the country with what he deemed radical or socialist proposals put forward by the left wing of the Democratic Party, particularly on health care, where his remarks came off especially political.

"We will never let socialism destroy American health care,” Trump said, a clear shot at "Medicare for All" legislation that has gained traction among progressive lawmakers and a number of leading Democratic presidential contenders.

Trump pledged that he would “always protect patients with preexisting conditions,” even as his administration pursues a lawsuit that would invalidate those very protections under the Affordable Care Act.

And the president swiped at Democrats for supporting government health care for immigrants in the country illegally while calling on Congress to pass legislation banning such benefits.

In a more pointed criticism of socialism, Trump recognized Venezuelan opposition leader Juan Guaidó, a rare moment that earned a bipartisan ovation. The U.S. has backed Guaidó as the rightful leader of Venezuela, which is facing a humanitarian crisis under embattled President Nicolás Maduro.

Trump gave the address hours after the initial results of the Democratic caucuses in Iowa were released after an hours-long delay. Those results underscored the strength of Sen. Bernie Sanders (I-Vt.), the self-describe democratic socialist who is running on a promise to deliver Medicare for All if he is elected.

Sanders was just behind former South Bend, Ind., Mayor Pete Buttigieg in the initial results from Iowa, with those two candidates well ahead of former Vice President Joe Biden.

Trump follows Bill Clinton in becoming just the second president to deliver a State of the Union address amid the cloud of impeachment.

Pelosi, whom Trump has repeatedly attacked on Twitter and at his campaign appearances, sat just over the president’s shoulder as he spoke. It was the first time the two were in a room together since an acrimonious White House meeting on Syria last October.

The audience included most of the House Democrats who voted to impeach Trump in December. Some prominent Democrats — including Rep. Alexandria Ocasio-Cortez (D-N.Y.) — opted to boycott the speech, and a few senators running for president remained in New Hampshire to campaign for the Democratic nomination.

The economy served as a centerpiece of the president’s speech, which revolved around a theme of “the great American comeback.” Trump, as he often does in public appearances, heralded gains made in the American workforce over the past three years, a boost in manufacturing jobs and deregulation as signs that his agenda has been a boon for blue-collar workers.

He pointed to the recent signings of a trade deal with China and the USMCA, a renegotiated version of NAFTA that made it through Congress with significant Democratic support. Two of his invited guests were meant to highlight an economic revitalization initiative included in the controversial 2017 GOP tax cut legislation.

Trump’s remarks echoed many of his other public addresses, though they also incorporated some unusual, surprise moments.

The president used a portion of his remarks to honor conservative radio host Rush Limbaugh, who was recently diagnosed with advanced lung cancer.

Trump announced that he was awarding Limbaugh the Presidential Medal of Freedom, which was promptly placed around his neck by first lady Melania Trump in the middle of the address.

The president later revealed a military officer had returned from his deployment and was in the chamber to surprise his family, prompting chants of “USA” from inside the room.

Trump and top administration officials have maintained since the early January drone strike that killed Soleimani that the Iranian Quds Force commander posed an imminent threat to American facilities and personnel despite limited evidence to support those claims.

In discussing the Soleimani strike on Tuesday, he recognized Kelli and Gage Hake, the widow and son, respectively, of Army Staff Sgt. Christopher Hake, who was killed while serving in Iraq. The White House said Christopher Hake was killed by a roadside bomb supplied by Soleimani.

A more fraught portion of the speech came when Trump discussed immigration, a cornerstone of his agenda and one of the most consistently divisive topics on Capitol Hill.

He touted efforts to clamp down on illegal immigration along the U.S.-Mexico border after his long-promised wall recently crossed the 100-mile mark in construction. Many Democrats have vehemently opposed construction of the wall, decrying it as a symbol of xenophobia.

Trump took more direct aim at Democratic proposals in excoriating sanctuary policies in effect in California and many municipalities nationwide in which local authorities do not enforce federal immigration laws, leaving it to federal agencies such as Immigration and Customs Enforcement.

One of the president’s invited guests was Jody Jones, a California resident whose brother was killed in late 2018 by an immigrant with a criminal history who was in the country illegally.

Trump’s remarks laid out a vision for his administration’s agenda in the throngs of an election year and suggest he’ll continue to put a heavy emphasis on many of the same focal points of his 2016 campaign — including the economy and immigration — as the election draws nearer.

Trump, who has been traversing the country for campaign rallies regularly over the past several months, will appear in New Hampshire next week on the eve of the first-in-the-nation primary there.