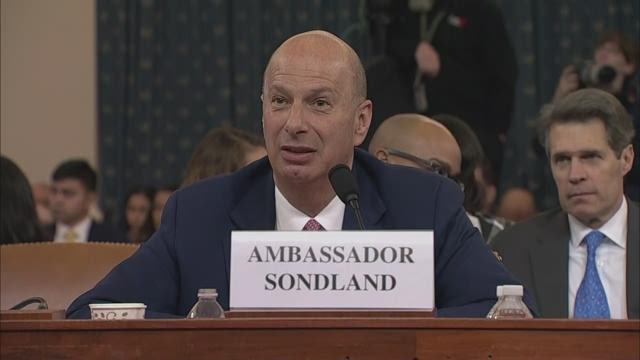 President Trump on Friday ousted Ambassador to the European Union Gordon Sondland, making him the second official of the day who testified in the House impeachment inquiry to be dismissed.

"I was advised today that the president intends to recall me effective immediately as United States Ambassador to the European Union,” Sondland said in a statement.

"I am proud of our accomplishments," Sondland added, thanking Trump and Secretary of State Mike Pompeo. "Our work here has been the highlight of my career.”

Sondland's statement came just hours after Lt. Col. Alexander Vindman was removed from his post with the National Security Council and escorted off the White House grounds.

Sondland provided damaging testimony against Trump in the House impeachment inquiry, saying during a public hearing that "everyone was in the loop" about the effort to pressure Ukraine to investigate the president's political rivals.

His dismissal marks an escalation in Trump's push to clear the administration of those who testified against him last year in the impeachment proceedings. That group now includes Sondland, who donated $1 million to Trump's inaugural committee.

Other witnesses, such as Jennifer Williams and Marie Yovanovitch, have been reassigned or left the administration entirely. Williams left her post in the vice president's office early at her request.

Sondland was viewed as a key witness for Democrats as they built their case that Trump withheld security aid and a White House meeting from Ukraine in an effort to pressure the government into investigating the Bidens.

“Was there a quid pro quo?” Sondland said in his opening statement at a November hearing. “With regard to the requested White House call and White House meeting, the answer is yes.”

But the White House sought to paint him as unreliable and lacking firsthand contact with the president. Trump distanced himself from his donor and ambassador, saying he hardly knew Sondland.

The ambassador's ouster is certain to be viewed as retaliation by Trump for his impeachment testimony.

Earlier Friday, Vindman was escorted off the White House grounds. Vindman, who listened in on Trump's July 25 phone call with Ukrainian President Volodymyr Zelensky, testified publicly that he thought the call was inappropriate and that he reported it to his superiors.

“There is no question in the mind of any American why this man’s job is over, why this country now has one less soldier serving it at the White House,” David Pressman, Vindman’s attorney, said in a statement. “LTC Vindman was asked to leave for telling the truth. His honor, his commitment to right, frightened the powerful.”