Trump maintains he can intervene in cases 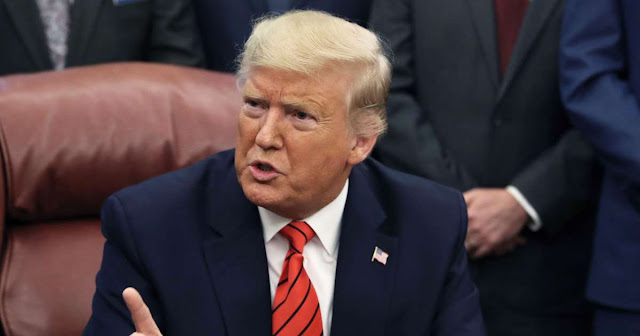 President Trump on Friday asserted he has "the legal right" to insert himself into the Justice Department's handling of criminal cases one day after Attorney General William Barr said the president's tweets were making his job more difficult.

Trump cited Barr's comments from an ABC News interview in which the attorney general said Trump had not asked him to take certain action in a criminal case.

"This doesn’t mean that I do not have, as President, the legal right to do so, I do, but I have so far chosen not to!" Trump tweeted.

Barr told ABC News in an interview that Trump never asked him to act in a criminal case, including longtime associate Roger Stone's, but that tweets about the Department of Justice and its employees “make it impossible to do my job and to assure the courts and the prosecutors in the department that we are doing our work with integrity.”

“I think it’s time to stop the tweeting about Department of Justice criminal cases,” Barr said.

The break between Barr and Trump came after the president spent much of the week ridiculing prosecutors and the judge involved in Stone's case. He decried the prosecutors' sentencing recommendation as a "miscarriage of justice" hours before the Justice Department said it would reduce its recommendation.

Republican senators have largely indicated they do not think Trump should weigh in on Stone's case or other criminal matters.

The White House on Thursday said Trump "wasn't bothered" by Barr's criticism and that the president still had "full faith" in the attorney general.

"The President wasn’t bothered by the comments at all and he has the right, just like any American citizen, to publicly offer his opinions," White House press secretary Stephanie Grisham said in a statement.

"President Trump uses social media very effectively to fight for the American people against injustices in our country, including the fake news," she added. "The President has full faith and confidence in Attorney General Barr to do his job and uphold the law."

Barr has frequently drawn scrutiny from Democrats and legal experts who have accused him of defending the president's interests, such as when he released a four-page summary of former special counsel Robert Mueller's full report that many viewed as favorable to Trump.