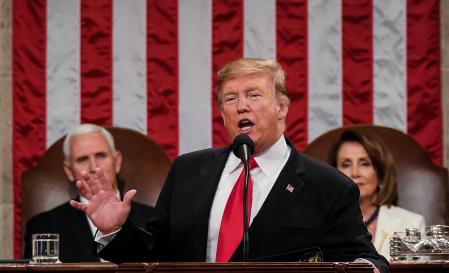 President Trump will deliver his third State of the Union address Tuesday night, when he is likely to use the national platform as a launching pad for his reelection bid.

The speech before a joint session of Congress will be bookended by two key events shaping Trump’s 2020 campaign: the beginning of the Democratic presidential primary contest in Iowa on Monday, and his expected acquittal Wednesday in the Senate impeachment trial.

The president has been holding campaign rallies regularly over the last few months, but Tuesday will give him the rare opportunity to speak to the nation during a lengthy prime-time address.

While the White House has mostly been mum on the policy specifics of the speech, Trump is expected to use the annual event to highlight his administration’s accomplishments and argue against electing Democrats.

The content of the speech will include the economy, health care, national security and immigration. Officials have not said whether Trump plans to acknowledge his impeachment.

But that prospect seems likely for a president who rarely shies away from using public addresses to attack his political opponents or hit back at what the White House has dismissed as a partisan effort to remove him from office.

The audience in the House chamber will include some of Trump’s frequent targets for criticism, including Speaker Nancy Pelosi (D-Calif.) and House Intelligence Committee Chairman Adam Schiff (D-Calif.), in addition to a number of senators running for president. It will also include some of the president’s most vocal supporters on Capitol Hill.

With the address, Trump will become only the second president in U.S. history to deliver a State of the Union speech after being impeached. Former President Clinton did not mention impeachment during his 1999 address, though he did make an appeal for “civility and bipartisanship” before discussing his agenda.

In the days leading up to Tuesday’s speech, Trump and White House officials have insisted it will strike an optimistic tone.

In an interview with Fox News that aired before the game, Trump dismissed the possibility of delaying the address until after the impeachment trial vote in the Senate and again said he would focus on his administration’s achievements.

The speech will turn on a theme of “the great American comeback,” according to a senior administration official who said the president will discuss a number of accomplishments and legislative priorities meant to appeal to working-class Americans at the outset of the 2020 race.

But with partisan divisions at a fever pitch, there appears to be little hope of the address staking out common ground between the president and Democrats in an election year.

Several Democratic lawmakers plan to boycott the speech entirely, and Trump indicated to Sean Hannity in his Sunday interview that he didn’t see a viable path to collaboration with Democrats post-impeachment.

“I’d like to, but it’s pretty hard when you think about it,” Trump said. “I’m not sure that they can do it, to be honest. I think they just want to win, and it doesn’t matter how they win.”

When asked whether Trump will strike the unifying tone that has often eluded him during his presidency, the senior administration official suggested that highlighting widespread economic gains would accomplish just that.

“I think the speech will be unifying in part because the president is focused on opportunity for all Americans,” the official told reporters last week.

Republican strategists say Trump would be best served by focusing on his achievements and potential areas of commonality with Democrats during the address, rather than dwelling on impeachment, though the circumstances surrounding Tuesday’s speech and Trump’s own style have led some to believe he is certain to mention the elephant in the room.

“He’s moving toward acquittal, his [poll] numbers have done pretty well throughout this process, and we’re not only in an election year but the day after the starting gun goes off,” said Republican strategist Doug Heye. “All of that tells us that what we should expect from Trump is a combative tone of exoneration.”

Sen. Lindsey Graham (R-S.C.), one of Trump’s closest allies in Congress, on Friday encouraged the president “to be positive, to talk about what we’ve done and what we can do.”

The broad topics of the speech — health care and immigration, among them — indicate there are sure to be some divisive moments.

One of Trump’s biggest applause lines last year was his pledge that America “will never be a socialist country,” a refrain that could make a return given that progressive Sens. Bernie Sanders (I-Vt.) and Elizabeth Warren (D-Mass.) are among the front-runners for the Democratic presidential nomination and have backed proposals like “Medicare for All.”

“Clearly, socialism is a rising force in the Democratic Party with very specific designs on our health care system,” the senior administration official told reporters. “And the president will build on last year’s address and present a sharp difference.”

Immigration is set to be another pillar of the address, an issue Trump made a focal point of during his 2016 White House bid.

The president campaigned on a pledge to build a wall along the U.S.-Mexico border. He is likely on Tuesday to boast about progress on wall construction as it passes the 100-mile mark, even as lawmakers in both parties have criticized the use of military funds for the project.

The senior administration official said Trump would specifically address sanctuary cities, the trend of Democratic-run municipalities offering protection for undocumented immigrants. The president frequently rails against sanctuary cities on the campaign trail, portraying them as havens for criminals and a consequence of electing Democrats.

Trump has for years advocated for restricting the flow of immigrants into the U.S. The administration on Friday announced it would severely curtail immigration from six countries in what was largely viewed as an expansion of the president’s controversial travel ban from his first year in office.

Ultimately, White House officials and those close to the president expect the economy to serve as the centerpiece of Trump’s speech, a strategy that mirrors his reelection campaign. But whether Trump is able to strike the positive and inclusive tone he has promised will likely determine how the message is received.

“The most presidential he’s ever been has typically been at the State of the Union,” a former White House official said, predicting Tuesday night’s address would be “a lot less political in nature, a lot more about policy, a lot more about the things that have been accomplished and things he hopes to accomplish over the next year and four years after that.”