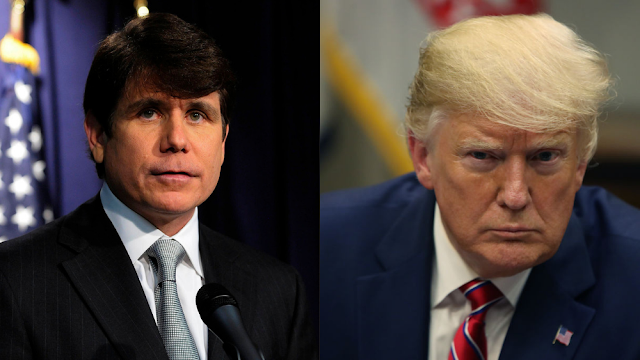 President Trump on Tuesday said he had granted clemency to Rod Blagojevich (D), the disgraced Illinois governor who had served roughly half of a 14-year sentence on federal corruption charges.

"I did commute his sentence. So he’ll be able to go back home with his family after serving eight years in jail," Trump told reporters before departing for a multi-day trip out west. "That was a tremendously powerful, ridiculous sentence in my opinion, and in the opinion of many others."

Trump just confirmed reports he has commuted the sentence of Rod Blagojevich, noting that the former Illinois governor is a Democrat, and was once a contestant on "The Apprentice"

Blagojevich was removed from office in 2009 and was later convicted of a wide array of corruption charges, including attempted extortion of a children's hospital for campaign contributions and trying to sell former President Obama’s Senate seat after he was elected to the White House in 2008. The former governor began serving a 14-year prison sentence in 2012.

He was infamously caught on tape speaking about the pay-for-play scheme involving Obama's seat.

The president first floated a commutation for Blagojevich in 2018. The two men knew each other previously from when the former governor appeared as a contestant on "Celebrity Apprentice."

Trump broached the topic again last August, telling reporters aboard Air Force One that he was inclined to commute Blagojevich's sentence.

"You have drug dealers that get not even 30 days, and they’ve killed 25 people," Trump said. "They put him in jail for 18 years, and he has many years left. And I think it’s very unfair."

A handful of Illinois political figures — including Sen. Dick Durbin (D) and the Rev. Jesse Jackson — have come out in support of reducing Blagojevich's jail time.

But members of the Illinois House Republican delegation issued a statement last year amid talk of clemency for Blagojevich discouraging Trump from the move, citing the state's long history of corrupt governors.

The former governor has advocated for a pardon or a reduced sentence for years, appealing directly to Trump in some cases.

Blagojevich's wife, Patti, regularly appeared on Fox News to make the case for clemency, and the governor penned an op-ed from prison in January in which he ripped House Democrats for impeaching Trump, claiming lawmakers would have done the same to Abraham Lincoln.

The president on Tuesday noted he had seen Patti Blagojevich on television. He also seized on a connection between U.S. Attorney Patrick Fitzgerald, who prosecuted Blagojevich's case, and former FBI Director James Comey. Fitzgerald in 2018 took a role on Comey's legal team.

Blagojevich was one of several individuals who received clemency on Tuesday. In total, Trump pardoned or commuted the sentences of nearly a dozen people.

Trump pardoned former San Francisco 49ers owner Edward DeBartolo Jr., who pleaded guilty in 1998 for failing to report that he was extorted by an ex-Louisiana governor. He also pardoned former New York City Police Commissioner Bernard Kerik, who was convicted of tax fraud and making false statements, as well as financier Michael Milken.

In many cases, the individuals who received clemency had high-profile advocates urging the White House to intervene in their cases, including conservative media personalities and GOP lawmakers.

Democrats appeared exasperated by the decision to aid Blagojevich in particular.

"President Trump commutes sentence of politician who tried to use official powers for personal gain. No surprise there," Rep. Mary Gay Scanlon (D-Pa.) tweeted of the governor's commutation.

"There are people who deserve commutations but won't get them from this president because he sees pardons as a way to undermine the rule of law, not to see justice done," Rep. Don Beyer (D-Va.) tweeted.