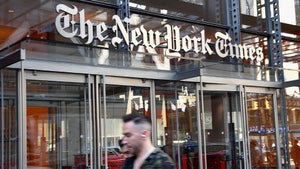 President Trump's reelection campaign is suing The New York Times for libel, claiming that the newspaper knowingly published false information about the president in an op-ed last year.

The lawsuit, filed in New York State Supreme Court on Wednesday, accuses the Times of intentionally defaming Trump with an op-ed claiming that his 2016 campaign had an "overarching deal" with Russia.

"The statements were and are 100 percent false and defamatory," Jenna Ellis, a lawyer for the campaign, said in a statement.

"The complaint alleges The Times was aware of the falsity at the time it published them, but did so for the intentional purpose of hurting the campaign, while misleading its own readers in the process,” Ellis added.

A spokeswoman for the Times did not immediately respond when asked for comment.

The lawsuit will likely have to overcome tough hurdles in order to succeed. In 1964, the Supreme Court severely restricted the ability of public officials to sue for defamation, ruling in the landmark case New York Times v. Sullivan that a plaintiff would have to prove that false statements about them were made with "actual malice."

Trump's lawsuit posits that malice is evident in the Times's bias.

"The Times has engaged in a systematic pattern of bias against the Campaign, designed to maliciously interfere with and damage its reputation and seek to cause the organization to fail," it reads.

The March 2019 opinion piece in question was written by Max Frankel, who was the Times's executive editor from 1986 to 1994. It argues that there was an understood agreement between Russia and the campaign to assist Trump in getting elected.

"There was no need for detailed electoral collusion between the Trump campaign and Vladimir Putin’s oligarchy because they had an overarching deal: the quid of help in the campaign against Hillary Clinton for the quo of a new pro-Russian foreign policy, starting with relief from the Obama administration’s burdensome economic sanctions," Frankel wrote. "The Trumpites knew about the quid and held out the prospect of the quo."

The Trump campaign is being represented by well-known media law attorney Charles Harder. Harder represented the wrestler Hulk Hogan in a lawsuit against Gawker Media that ultimately led to the news and gossip site's shuttering.

In 2017, Harder threatened a defamation lawsuit against the Times on behalf of the disgraced Hollywood producer Harvey Weinstein, who this week was convicted of two counts of rape and sexual assault in New York. Harder later left Weinstein's legal team and no lawsuit was filed.

He's also represented multiple members of the Trump family in their battles with the media, and defended the president against a defamation suit from adult-film star Stormy Daniels, who claimed to have had an affair with Trump. The lawsuit was ultimately dismissed.