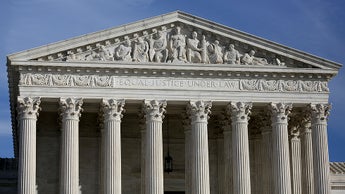 Texas and a coalition of conservative states on Monday urged the Supreme Court not to step in and hear a lawsuit seeking to overturn the Affordable Care Act.

The states said that a lower court first needs to rule before the Supreme Court can take up the case.

Texas Attorney General Ken Paxton said it was premature for the Supreme Court to take up the case without first waiting for a decision from a district court judge in Texas.

“This Court should not allow petitioners to leapfrog lower-court consideration,” Paxton wrote.

Paxton noted that the law will remain in place while the appeals process unfolds, so the case is not “ripe” for review. The Trump administration, which declined to defend ObamaCare in court, is expected make a similar argument today.

The court filing was made in response to an effort by a group of Democratic states and House Democrats to convince the Supreme Court to step in and hear the case during the current term. Attorneys for the House argued the lower court’s decision threatens to destabilize the healthcare system.

Paxton and the other red states want the law to be overturned, but they do not want the uncertainty over the law’s future impacting millions of Americans until after the November election.

The Supreme Court last month rejected an argument by Democratic states and the House to speed up a review of the lawsuit.

Instead, the appeals court punted decisions about the rest of the law down to the district court judge in Texas, who previously ruled that since the mandate was unconstitutional, the entire law was, too.